‘Zombie Angelina Jolie’ statue which terrified residents in Russian city lasts just one day, torn down after outcry from locals 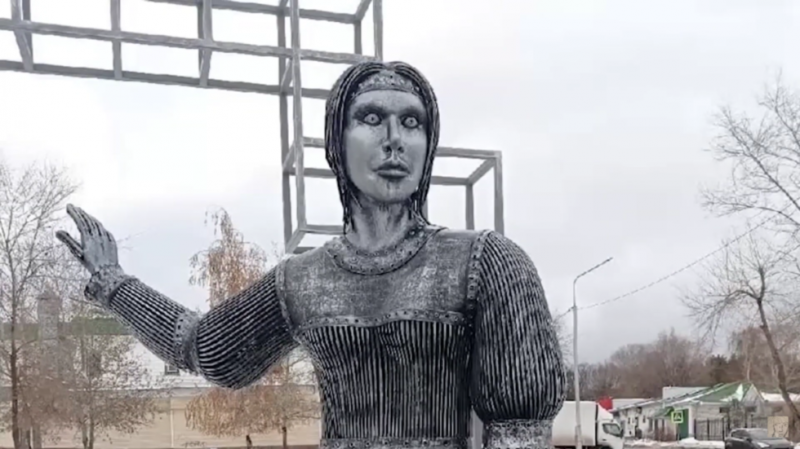 Authorities in Novovoronezh were filmed using a crane to pull up the figure and load it into a truck on Monday. Named ‘Alenka’, it had been unveiled only the day before, in honor of the 250th anniversary of the village first founded on the site.

However, the installation found few fans in the local community, with social media users fearing that its blank stare and alien-like features would scare children. One user wrote that it was “more like a monument dedicated to the victims of COVID-19. It’s a pity that they didn’t put it at the entrance to the city.” Others said it more closely resembled rock singer Marilyn Manson or a “Zombie Angelina Jolie,” and the statue quickly became a meme on Russian-language social networks.

The senator for the region, Alexey Pushkin, added his voice to those complaining about the installation, saying “yes, it’s creepy. The eyes are like those of an extra-terrestrial.”

The head of the city’s administration, Svetlana Tulinova, told the RIA Novosti network on Monday that “it will be taken down today. It’s not a monument, it’s an art installation. Our working group dedicated it to the events marking the anniversary of the village of Novaya Alenovka. Installation of the art object is just one of many such events.”

According to local legend, the city was originally founded by a young girl named Alenka by the banks of a small stream. She met a tragic end when she was murdered by a villain, but grateful villagers named the settlement, which eventually grew into Novovoronezh, after her.