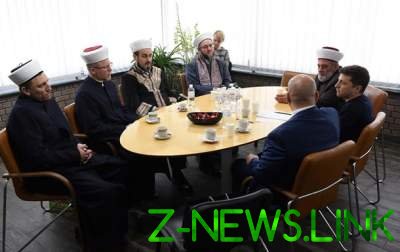 Meeting with Zelensky was quickly organized after the appropriate request of the mufti.

As reported by the mufti of the Spiritual administration of Muslims said Ismagilov in Facebook, meeting with Zelensky was quickly organized after the appropriate request of the mufti published in the social network on may 1.

“Vladimir Zelensky allowed to speak to each in turn. He said that he wants the unity of Ukraine and Ukrainian society, calls all to reconciliation and consolidation, and hoped that religious leaders will contribute to this. He also noted that the need to attract foreign investors with investments in various sectors of the economy, including from Muslim countries. And also noted that Ukraine needs peace between believers of different religions”, – said Ismagilov.

Ismagilov stated that he left a positive impression from the meeting with the newly elected President. “Most of all surprised by the reaction speed of the team Mr. Zelensky and the extraordinary openness of Mr Zelenskiy, which is almost two hours and talked with us and listened to each of those present”, – he said.