‘You knocked my teeth out’: Paige VanZant loses to Britain Hart on Bare Knuckle FC bow in front of celebrities & UFC stars (VIDEO) 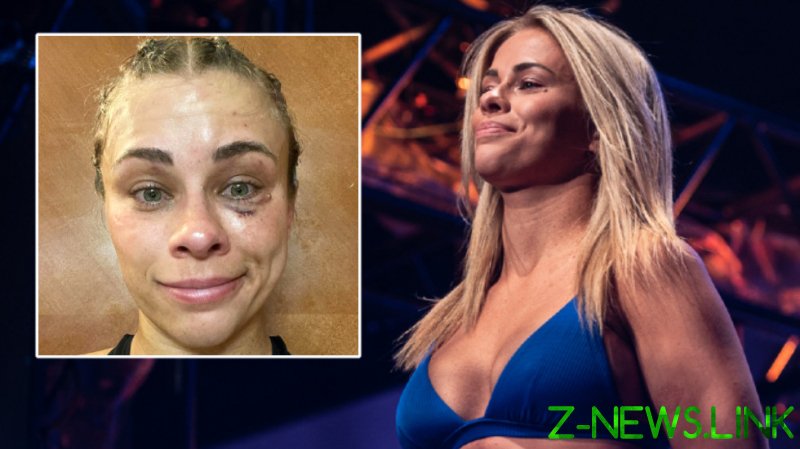 Little-known scrapper Hart, who entered the bout with a record of two defeats from three fights in the discipline, had been involved in a fiery weigh-in with VanZant and was ecstatic in the ring after the verdict, screaming into the microphone while insisting she was “not a person.”

“I’m a f*cking feeling, and all of you guys are going to feel it,” she bizarrely told the arena, having been told to “stay humble” by VanZant as the pair embraced following the fight.

A set of stitches under one eye was the most noticeable damage she appeared to have sustained as she enacted her post-fight advice to Hart by writing: “Humble in victory. Humble in defeat.”

Bellator fighter and fellow Instagram pin-up Valerie Loureda offered her love to VanZant, who was confirmed to have left the UFC in August.

Reaction to the fight ranged from viewers impressed by VanZant’s performance to others who felt she should retire after failing to register a first win in more than two years.

Others mocked the model, who is known for her racey photoshoots with Vanderford on social media, by saying that she should create an account on adult subscription site OnlyFans – a move that she is regularly asked to make by fans of her looks.

VanZant seized upon the publicity she received during the week by announcing the launch of her own subscription fan site, initially promising “exclusive content” including behind-the-scenes training insights.

“What a welcome to Bare Knuckle Boxing for Paige VanZant, thinking that wasn’t the easy check she was planning on grabbing,” said one viewer.

“What an odd descent for her from her early UFC days. So much hype behind her and now here we are watching her take a loss at KnuckleMania?”

The 26-year-old had claimed that she received ten times more with her new promotion than she did when fighting for the UFC, reportedly collecting around $400,000 for the showdown.

“I thought VanZant had a great showing,” reacted one admirer. “She came in and faced one of the top contenders in bare knuckle boxing and showed she can pound with her.

“If there had been one more round, I think VanZant would have taken it.”

The commentary team seemed to agree as they looked back at the closing stages. “Great exchanges, right there,” they said.

“She finally started opening up, she finally found the distance on the inside, just like she thought she could do the entire time.”

Hart also had words of praise. “I loved Paige VanZant,” she admitted.

“She was an idol to me because she was a pretty girl who could break the limits. I really wanted to knock her out in the third round.

“I’m not the most technical boxer but I was not going to let Paige VanZant out-work me.

“I hope the boss man fixes my teeth again. That would be nice. I started off with crooked teeth, then Bec helped get them really straight and Paige, credit to her.

“I’ve never been hit as hard as as Paige VanZant hits. I’ll give her that, so everyone got it right whoever said that girl’s got power. They were not lying: that’s the hardest I’ve ever been hit.”

Thanking organizers, she added: “Great fights and always appreciate your kindness. Can’t wait to see Paige VanZant in there again.”

Manager Malki Kawa shared a photo of VanZant and Vanderford in the locker room before the fight and told the fighter: “You’re a beast.”

Looking at VanZant’s bruises, Bellator featherweight Arlene Blencowe said: “They’ll come up nicely. Congratulations on stepping in there and putting on a show.”

Hart and VanZant had taken part in a painfully wooden stunt in a post-fight ring to announce their encounter last year, and there was another strange theatrical moment for the winner this time as one of her rivals climbed between the ropes without any apparent challenge.

Hart squirted water over her enemy’s head before labeling her “trash” to the audibly confused crowd.

“That girl doesn’t have a name and I’m not going to call her out,” she seethed.

“There are levels to this sh*t, and it’s not getting in [the ring] and taking someone else’s shine.