Home / WORLD / ‘You don’t have to worry’: Amnesty reveals it snubs inconvenient media and rights issues in prank call with ‘Navalny ally’

‘You don’t have to worry’: Amnesty reveals it snubs inconvenient media and rights issues in prank call with ‘Navalny ally’ 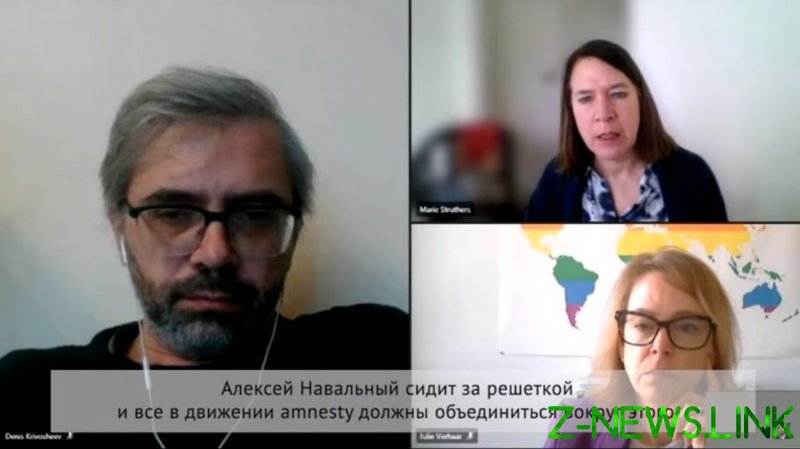 During a zoom call, Amnesty International’s Secretary General Julie Verhaar, Eastern Europe and Central Asia director Marie Struthers and her deputy Denis Krivosheev bent over backwards to assure ‘Leonid Volkov’ that the organization was still backing Navalny, even though it revoked his “prisoner of conscience” status over previous remarks that qualified as hate speech.

Treating the row as a public relations problem, Amnesty International officials told ‘Volkov’ they couldn’t go back on the decision because that would make them look bad, but assured him they would launch a massive social media campaign in support of Navalny and not lift a finger to help Russian journalists persecuted in Latvia.

There was just one tiny problem: Volkov never spoke with them. They were actually talking to the notorious duo of Russian pranksters known as ‘Vovan and Lexus’.

The trio of Amnesty officials had no idea, however, and went so far as to agree with the actual Volkov’s angry tweets when Vovan brought them up, telling him he had every right to be angry about the organization’s decision.

Amnesty’s decision to backtrack on Navalny’s status caused some backlash, but the blogger’s allies quickly shifted the blame to RT and other “Russian media” for allegedly waging a smear campaign against him.

Krivosheev assured ‘Volkov’ that they “don’t speak to RT,” or give interviews or even respond to interview requests, and apologized that a staffer did so, exposing Amnesty’s “internal discussions.” However, the original email revealing the Navalny decision was sent to Grayzone’s Aaron Mate, not RT.

Struthers offered a “short, powerful, clear social media campaign” in favor of Navalny to “steer the conversation away” from the whole prisoner of conscience affair, and asked ‘Volkov’ to help get others on board.

Krivosheev echoed that thinking saying that Amnesty wanted to “move media attention” away from its internal decisions and back onto Navalny.

The blogger has been anointed by Western media and politicians as “Russian opposition leader,” despite polling in single digits. He recently accused Moscow of trying to poison him with “novichok” nerve agent hidden in his underwear, requiring a lengthy hospital stay in Germany. Upon returning to Russia, Navalny was found in violation of his 2014 parole in an embezzlement case and sent to prison. He insists the conviction is political.

When ‘Volkov’ urged Amnesty to not help the Russian journalists arrested in Latvia as “propagandists,” Krivosheev assured him they were watching the issue but “have no intention to respond, at least for now.”

“You don’t need to worry that we will say something on that,” he said, repeating that Amnesty is ignoring RT and Sputnik entirely.

Latvia, one of the three Baltic republics of the former Soviet Union, has recently moved to ban several Russian-language channels and punish citizens who watch them with fines.

‘Vovan and Lexus’ is a project by pranksters Vladimir Kuznetsov and Alexey Stolyarov, who have been collaborating for at least a decade. The duo has a long and proud history of prank calls both in Russia and abroad. Last year, they posed as Swedish climate activist Greta Thunberg in a call with American actor Joaquin Phoenix.