Home / WORLD / ‘You can’t win that one’: Trump suggests Fauci was UNFIREABLE, claims he did ‘opposite’ of what Covid adviser said 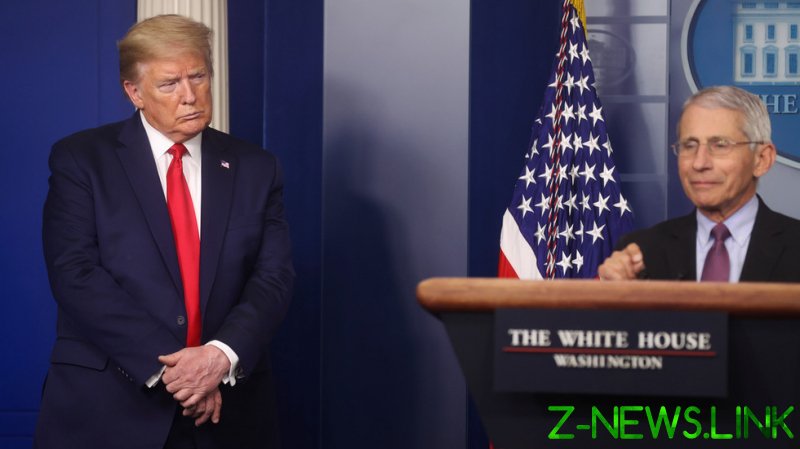 Appearing on ‘The Water Cooler’ on Real America’s Voice this week, Trump was asked if he had regretted not firing Fauci – something his supporters had called for numerous times.

“Well, you know, David, he was there for like 40 years or something, right?” the former president told host David Brody, referring to Fauci’s long-standing position at the National Institute of Allergy and Infectious Diseases. “He was a part of the furniture. But if you think about it, I really did pretty much the opposite of whatever he said.”

Though Trump said he “got along” with Fauci, the two publicly disagreed and even feuded, with Trump often criticizing Fauci for his mask policies and pandemic-era restrictions, and Fauci criticizing Trump for not taking Covid-19 seriously enough. As for firing Fauci, Trump said, “you can’t win that one.”

“If I would’ve done it, I would’ve taken heat. If I didn’t do it, you know, it’s the same story. But I did what I wanted to do, and I made the correct decisions,” he said.

If Fauci continues to serve in his position as health adviser to the White House, he and Trump could find themselves working together once again, should the Republican decide to run in 2024, something he continued to tease during his ‘Water Cooler’ interview.

But Fauci, Trump concluded at one point, “is a better promoter than he is a doctor.”

According to Trump, key decisions early in the pandemic were made by him and resisted by Fauci, including closing America’s borders to arrivals from China.

He also accused Fauci of having become a “radical masker,” having first actively advised Americans not to mask up – a contradiction the expert’s critics have mentioned in light of his shifting stance on protecting public health.

Asked what might prevent him from running again in 2024, Trump replied, “Well… I guess a bad call from a doctor or something, right?” The former president, who is 75, quickly reassured viewers that he currently felt “so good.”