Yes, steam trains are now to be declared racist 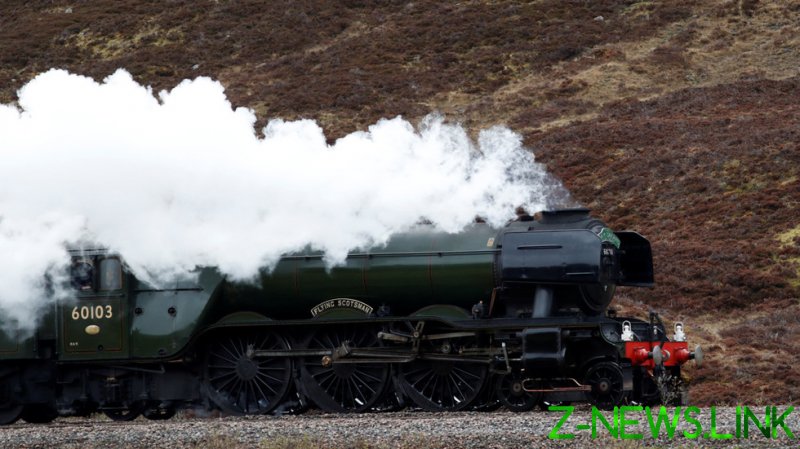 I pity the poor trainspotters. You know, those nerds in anoraks who stand on bridges and hang around railway stations so they can scribble down the latest sighting of iconic choo-choo trains such as the Flying Scotsman, the Mallard or the Tees-Tyne Pullman.

I mean, what harm did those freaks ever do anyone? They travel all over the world, these people, looking for exotic locomotives. Who knows what hideous histories might be hidden within those chuffing bits of metal?

Steam bursting out of funnels is suspiciously white and may not be as innocent as it looks.

And someone is now paying real money to investigate the inherent racism of steam. The cash – surprise, surprise – is coming from a university fund. The White Rose Consortium is shovelling £9,000 into Britain’s National Railway Museum in York to investigate its collection of steam engines for any links to slavery and colonialism.

Leeds, Sheffield, and York Universities make up that consortium, and these funders of navel-gazing will blow the dosh on an examination of the economic, social, and infrastructural legacy of boiled water.

The research project ‘Slavery and Steam: steam power, railways and colonialism’ will also be assisted by curators at the National Railway Museum, the Science and Industry Museum in Manchester, and Leeds Industrial Museum.

Wonderful. Right now, that’s just about the most important thing I can possibly imagine to burn nine grand on.

“The relationship between steam power and global trade is complex,” said project leader Professor Jonathan Finch of the University of York. “Steam engines replaced wind power on the plantations and waterpower in British cotton mills; steamboats transported raw materials and goods around the globe.

“Railways were critical to the expansion of colonial power across Asia and Africa, as well as the opening up of the North American interior. Wealth generated in the colonies was a stimulus to industrialisation, long after the abolition of slavery in the UK and US. This project will examine the economic, social and infrastructural legacy of steam and slavery in the late 19th and 20th centuries.”

This hot air, apparently, came out of the back end of last year’s Black Lives Matter protests. It’s all part of a reassessment of the legacy of rail travel and colonialism at the Science Museum Group, of which the National Railway Museum is part.

Museum staff found that, among its collection of almost 300 locomotives and rolling stock, there was “little interpretation that addresses the railways’ role in empire.” Steam engines that “speak to this theme” are likely to be scarred with some sort of a plaque confessing their guilt.

Those in the frame for a confessional badge include the KF7 locomotive, which was built in Britain in 1935 for the Guangzhou–Hankou railway in China. The engine was paid for by reparations from an indemnity fund China had to pay into after the crushing of the Boxer Rebellion.

A model of a Bombay, Baroda, and Central India Railway steam engine has also been highlighted, over how such trains helped “strengthen British colonial rule in India.” Then there’s an 1896 Cape Government Railway locomotive, which “represents a range of stories from Britain’s imperial project.”

Staff were already worried about the train that carried Winston Churchill’s coffin from his state funeral to his final resting place in Oxfordshire in 1965. The train could become a focus for protesters, they feared, due to Churchill’s links to “colonialism and empire.”

Robert Stephenson’s pioneering Rocket steam engine could also fuel a protest. The Liverpool and Manchester Railway, Stephenson’s benefactor, had links to profits made through the slave trade. Science Museum Group staff told managers the institution’s collections are “inherently racist and colonialist” and “made up of many objects acquired through imperialism.”

Working conditions for labourers on railways in colonies such as India need to be investigated, and Britain’s early railways also transported sugar and cotton produced by slave labour in the Americas.

“They knew where these products were coming from,” Dr Oliver Betts of the National Railway Museum told the York Press. The railways’ links to slavery have largely been “airbrushed from history,” he added.

“But it is all part of the story. This (project) will shine a spotlight on the links between slavery and railways. We are examining Britain’s colonial past to look again at the stories we tell, the voices we represent, and the challenges we face in presenting complex, hitherto untold stories to the public.”

Is there no end in sight for this track of woke nonsense? Surely it’ll all have to run out of steam soon? Where, really, is there left to go?

Oh, hang on a second, though… Most of the slave trade occurred way before the age of steam, when ships relied on sails to get from Africa to the colonies. For God’s sake, don’t tell the wokey managers of a university fund – they’ll try and cancel the wind next…