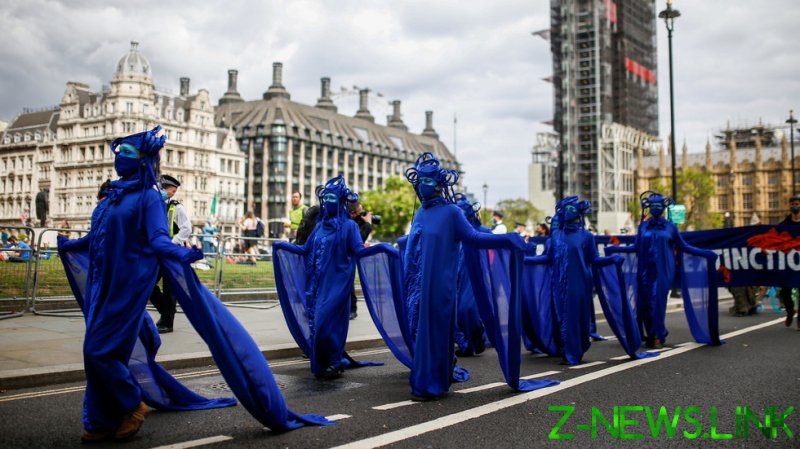 While Extinction Rebellion (XR) has been getting lots of attention for its bizarre and disruptive protests, the real madness is the fact that the political and media establishment agrees with its aims. The only quibbles are over timing and methods.

Over the past week or so, XR has reignited its protests after being in abeyance during the Covid-19 pandemic. As is the usual routine, roads have been blocked and institutions targeted. On one day, XR harassed a group of British think tanks based in a shared building in Westminster. Another group of protesters glued themselves to the ground in front of a doorway into Parliament, perhaps symbolic of XR’s disdain for democracy.

Most controversially, XR protesters blocked printing plants for The Times, The Sun and The Telegraph, preventing delivery of the newspapers. XR accuses these publications of promoting lies about climate change. Here was an attack on the free press, and the backlash was substantial. Rather than debating the arguments for a rapid reduction in UK greenhouse gas emissions, the protesters seemed to believe that these media outlets were responsible for brainwashing the public and should simply be shut down.

The newspapers were, rightly, outraged. But the irony is that these publications all broadly agree that climate change is an existential threat to humanity. Saturday’s edition of The Sun even included an article by David Attenborough, the veteran voice of BBC wildlife programmes, demanding stronger action on the environment. At most, The Telegraph has included a handful of sceptical voices in its opinion pages, but the editorial line is right behind the government’s ‘drastic carbon emission plans’.

It is those plans that should alarm us far more than XR, who are a bunch of oddballs engaged in staging stunts that are annoying and disruptive, but which are also bizarre. It seems that XR supporters believe that they can bring down The System through the medium of interpretative dance, staging ‘die-ins’, meditating outside leading banks or dressing up in costumes that offer alarming echoes of ‘The Handmaid’s Tale’.

For the environmentalist mainstream, XR is utterly embarrassing. Moreover, while demanding that we listen to the scientists, its own claims of imminent global destruction are utterly unscientific.

Meanwhile, every significant UK political party has fallen in line with the idea that we should aim to reduce greenhouse gas emissions to ‘net zero’ – that is, zero emissions once the effect of counteracting policies like planting trees is taken into account. That is exactly the same aim as XR. The only question is over what the target date should be. XR wants to get to net zero in five years, the government wants to do it in 30. But that aim itself is bonkers.

To achieve such a goal would mean a very rapid decarbonisation of society. Without the technology to replace fossil-fuelled transport, energy production, cement, food production and much more, this could only be achieved by a drastic reduction in living standards that would make the post-lockdown recessions look luxurious in comparison. ‘Net zero’ doesn’t just mean turning down the thermostat a bit and recycling your plastic – it means a wholesale transformation into a shivering, stay-local, lentil-munching society.

As a new report by the Institute of Government, a British think tank, notes that ‘there is still little evidence that the government, and the politicians who waved the new target through with little debate, have confronted the enormous scale of the task ahead’.

Moreover, it isn’t clear if imported goods would count in this target. If they do count, then somehow the UK would need to go into negative emissions, since it would have to make up for the emissions created abroad during the production and transportation of those goods. If they don’t count, the net zero target itself becomes rather meaningless – we would just import stuff instead of producing it in the UK.

This places the government in a quandary. It shares XR’s basic aim, while hating the disruption that XR’s protests cause. For example, one Conservative MP, Tobias Ellwood, has come out in support of XR’s original ‘noble cause’, but says he thinks the protesters have gone too far. The result has been a hands-off approach. While protesters against the Covid lockdowns have faced arrest and heavy fines simply for assembling in large numbers, the police have been slow to break up XR’s protests.

Some ministers recognise that this is untenable for the normal functioning of society, but their response has bordered on the irrational. There are now rumours from within the government that XR might be designated an ‘organised crime group’, based on the definition that such a group is ‘characterised by violence or the threat of violence and by the use of bribery and corruption’. This is as bizarre as one of XR’s protests. Whatever it is, XR is not akin to the mafia or a drugs cartel.

There are easier and less illiberal ways of dealing with the problem. XR should not be stopped from peaceful protest. If XR supporters block a road or attack a building, there are perfectly ordinary laws that can be used to arrest them without undermining the right to assembly and protest.

While XR’s antics mostly attract derision, the truly crazy thing is the policy of ‘net zero’. And because every major political party agrees with it, voters have simply been given no choice in the matter. It’s not the lunatics dressing up and blocking the roads we should worry about; it’s the lunatics in Parliament who keep voting for these irrational and reactionary policies.