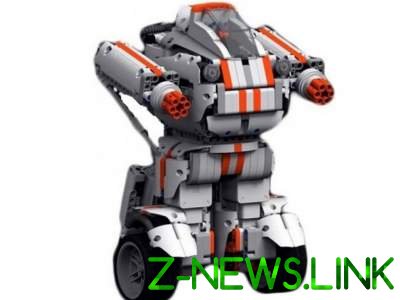 Mi Robot Builder is a constructor, which consists of 1086 parts that, combined, can be assembled, for example, tracked robot, transformer, or the t-Rex.

But the company does not restrict users to only these variations. All depends on the imagination and desires of a particular person.

To control the device from your smartphone.

Part of the designer comes with a battery, and a special transmitter, through which control is exercised.

To move to the same device may either with tracks or with wheels.

Moving Mi Robot Builder thanks to two high-speed brushless motors with rotation speed up to 170 rpm.

Also the motor has a built-in photoelectric sensor which automatically switches the motor to standby mode when it stalled, to prevent overload.

Charge battery as said at the presentation, designed for 12 hours of work.

To control the robot is possible through a special app via Bluetooth. The app works as a database on iOS and Android.

By the way, Xiaomi is a choice of three options for device management using a joystick, a touch screen of a smartphone or a block of commands in a special mode.

See also:  Experts have calculated the real cost of Xiaomi

Thanks to a well-developed system of balancing the robot will not fall.

Made designer of high quality and hypoallergenic materials.

Device weight is about three kilograms.

In the Ukrainian Internet-shops you can order this device at the price from 2710 up to 3000 hryvnia.

Also, we have previously reported that yesterday, July 24, Chinese insiders posted a photo of the front and rear panels of the future smartphone with the code name Quadra, which develops the company Ilona Mask Tesla.