Home / WORLD / World Emoji Day has given us a pregnant man, but don’t worry… I still very much doubt dudes can birth

World Emoji Day has given us a pregnant man, but don’t worry… I still very much doubt dudes can birth 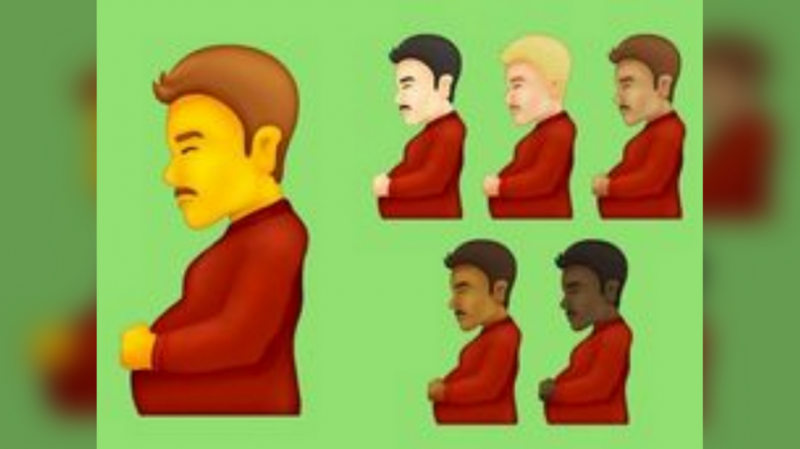 Who would have thought there could ever be the need for such a thing, but 17 July is, apparently, World Emoji Day. Yippee. It’s so exciting, vital even. I can hardly contain my joy at the arrival of this awe-inspiring occasion.

And, on that score, who would ever have thought there would ever be the need to have a little cartoon of a pregnant man? I didn’t think men could get pregnant, yet. How could I have missed such a monumental event?

Oh, hang on a sec, I just checked. It is still clinically impossible for a genetic male to get pregnant on account of the dude having totally the wrong biology. A fetus cannot gestate in a box, not yet anyway. It requires a ‘womb.’ You know, the bag that comes with the package when you’re born a female of the human species. We all start out in a womb.

And blokes – dudes, chaps, fellas, call ’em what you want – they simply don’t have what it takes. Sorry guys, I apologise if that hurts your feelings. But nature, biology, simply doesn’t care about how you feel.

Yes, I know, there are bearded people who have given birth. But at the fundamental genetic level – in their very DNA – they’re female. They’re transgender men, meaning they started life with a vagina and a uterus. The bits required to cook that fertilised egg, they’re set in the womb of their mother – oops, sorry, birthing person – by about 22 weeks.

It’s already too late before you’re born. Never mind though, eh? At least you now have an emoji.

You do know what an emoji is, right? On the off-chance you’ve been lucky enough to have managed to avoid them up to now, I’m gonna ruin it for you. First came emoticons – ‘emotion icon,’ get it? So, folk used to just type 🙂 for a smiley face, or 🙁 for a sad face. Etc. Simple enough. Emojis, which derived from the Japanese words for picture, ‘e,’ and for character, ‘moji,’ followed a while later. Fascinating, eh?

They’re those bloody irritating little cartoons that some people pepper their emails and messages with these days. It’s fine if you’re 13 years old. But if an adult sends me these things, I may well think there is something wrong with them and they don’t actually know how to type out real things called ‘words.’ There’s even a limp little film about these things called The Emoji Movie. Of course there is.

Anyway, apparently World Emoji Day has been celebrated on July 17 for years and I never even noticed. Oh well. This year, to mark this vital occasion, the club of people who decide on what gets to be an emoji – the Unicode Consortium – have announced a whole raft of new ones to be dripped out over the coming year.

Awesome. How the hell do I get a job working for the Unicode Consortium? Imagine the fun to be had, subverting global culture with emojis such as ‘the English football hooligan’ and ‘too fat to run’ and ‘the statue toppler.’ How about ‘gay Adolf’? That one could be a camp little Nazi with a toothbrush tash wearing a leather outfit. And so on.

But if this whole woke cultural abyss we’re falling face first into really gets on your tits – male or female, of course –  these new little idiotic icons are pretty much guaranteed to ruin your Saturday. So look away now…

Stealing the show is the pregnant man, available – obviously – in a variety of skin tones. And just to make sure we know he MUST be a man, he has a moustache. Do all transgender dudes have to grow a moustache? Is that kind-of a rule these days?

The ‘pregnant person’ one, though, doesn’t have a hairy face and is in a green jumper instead of red. Dunno why. Maybe there’s some kind of colour code significance that passed me by.

Then there is the handshake one, where you can choose a variety of shades of skin tone for either hand. Loads of Emojis are yellow. I don’t know, and I have never actually met, a bright yellow person. Have you? I’m fairly sure they only exist on The Simpsons.

Then there’s the ‘person with a crown’ image? Dunno what that’s supposed to mean; there have always been kings and queens, princes and princesses. A prince can be a princess, and vice versa? Maybe that’s it. That’s a great idea for Prince Harry and his woke wife Meghan to ingratiate themselves back onto the Windsor payroll. Maybe they can sell the idea to the Queen? Has to be ginger though, surely.

The folk who decide these things are clearly busy boys and girls, as they announced a fresh load only a few months back. Those beauties included a bearded lady avatar plus a ‘gender-neutral’ bearded face. Don’t struggle trying to unpick that one or the need for both, it won’t help it make any kind of sense.

Before that came gender-neutral couples and menstruation. Ah, yes, the ‘time of the month.’ That too is, still, I’m afraid chaps, an exclusive domain for the genetic human female.

They’re gonna run out of options soon, surely. Where is there left to go with all this? Well, they could give me a job! Have a laugh with it, stop taking yourselves so effing serious. Better still, how about we all bin the emojis, emoticons and gifs – they’re little videos, in case you’re wondering – and just type out the words instead? They’re far more precise. Or, God forbid, make a phone call. Hey, here’s a wacky – some might say insane – idea: talk to them face-to-face over a beer. Then he can show off his brand new moustache and pregnancy bump.