Home / WORLD / With Kabul about to surrender to Taliban, NATO & US talk of ‘finding political solution’ & of women’s rights in Afghanistan

With Kabul about to surrender to Taliban, NATO & US talk of ‘finding political solution’ & of women’s rights in Afghanistan 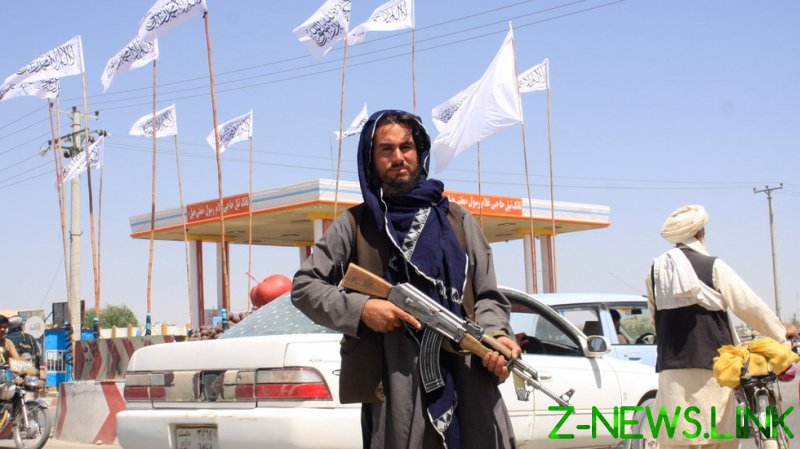 The US’ withdrawal from Afghanistan after 20 years preceded a lightning advance by Taliban militants. Seizing province after province and city after city in recent days – often without firing a shot as the US-funded Afghan National Army surrendered – Taliban forces arrived in the capital city Kabul early on Sunday to negotiate the surrender of President Ashraf Ghani and the transfer of power.

With his military defeated or surrendering and the US hurriedly evacuating its diplomats from the city, Ghani is not negotiating from a position of strength, and all that remains to be decided are the conditions of his surrender. Nevertheless, outside observers still insist that the Taliban can be influenced by official statements and political finger-wagging.

NATO insisted on Sunday that it will maintain a presence in Kabul and keep the city’s airport operational, an alliance official told Reuters. “The security of our personnel is paramount, and we continue to adjust as necessary,” the official stated. “We support Afghan efforts to find a political solution to the conflict, which is now more urgent than ever.”

Efforts to reach a political solution have already been underway for some time, with representatives from the Taliban and the Afghan government meeting in Qatar on a regular basis for several months. These talks wrapped up before the weekend, with envoys from the US, China and other states calling for a peaceful solution, a call swiftly rendered redundant by the Taliban’s blitzkrieg advance on Kabul. The Taliban promised a month ago to present a written peace plan to the Afghan government by this week, but never did, evidently opting to seize what it could by force before talking peace.

NATO has issued similar statements over the past few days. Secretary General Jens Stoltenberg declared on Friday that “the Taliban need to understand that they will not be recognised by the international community if they take the country by force,” echoing the tone of US President Joe Biden’s White House, where Press Secretary Jen Psaki cautioned the Islamist militants last week that “they need to make an assessment about what they want their role to be in the international community.”

Whatever form the settlement between the Taliban and the remnants of Ghani’s government takes, the US has made it clear that it will not intervene militarily unless its personnel are attacked on their way out. Their exit has been expedited in recent days, with Secretary of State Tony Blinken telling CNN and ABC on Sunday that the US embassy was being abandoned and staff moving to Kabul Airport, all the time assuring viewers that the rout is “manifestly not Saigon,” a reference to the panicked US retreat from South Vietnam in 1975.

Lawmakers back in Washington have continued to make demands of the Taliban, even though both Biden and Blinken have repeatedly stated that US involvement in Afghanistan is over. House Speaker Nancy Pelosi released a statement on Saturday night calling on the Taliban to “[have] women at the table” when a political solution is hammered out, warning the group that “the world is watching.”

The Taliban has promised that Afghan women will not be deprived of work opportunities or education when the militant group comes to power, on condition that they remain veiled in public, per Sharia law. Yet even if they renege on this promise, Pelosi, Blinken, Biden, Stoltenberg and a host of concerned westerners will likely do little in response, bar issuing further scolding responses as the flag of the Islamic Emirate of Afghanistan flies over Kabul.

At time of writing, a solution completely favoring the Taliban appears close at hand. President Ashraf Ghani has left Kabul and was reportedly en route to Tajikistan. Taliban militants have entered the capital, saying they were taking over the posts abandoned by police.