Home / WORLD / Why have British police treated eco activists with kid gloves, when they’ve clamped down so hard on lockdown protesters?

Why have British police treated eco activists with kid gloves, when they’ve clamped down so hard on lockdown protesters? 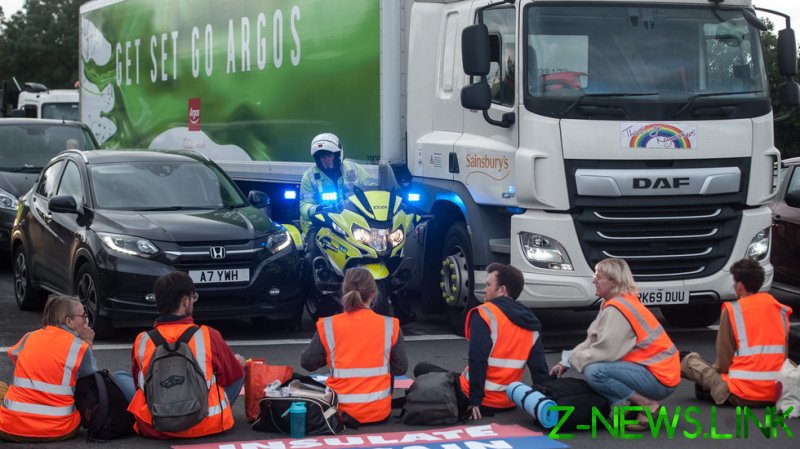 As you watch a policewoman talk to a group of environmental protesters blocking the M25, Britain’s busiest motorway, you might draw the conclusion that she was addressing a group of naughty 11-year-olds out on a camping trip.

Thanks to the anti-social behaviour of one group, Insulate Britain, thousands of motorists have been prevented from getting to work on time. Others have their lives turned upside down because they have to make a long detour to get to their families.

However, the police seem to be disinterested in the plight of working people. Instead, they appear to be giving a nod and a wink to the protesters sitting on the road and blocking people from getting on with their lives.

It is as if the police are saying ‘boys will be boys’ and ‘girls will be girls.’ Until I watched this scene, I had never heard a police officer tell a group of law breakers, “if you need any assistance just let me know.” Adopting a tone of reassurance, the policewoman communicates empathy and, with a smile, informs the protesters that she and her colleagues “will try to sort you out the right way.”

Evidently, the priority of this group of police officers is to make Insulate Britain campaigners feel comfortable rather than get on with the job of opening the road to traffic.

In another scene, the police actively help the sit-down protest get off to its start. Officers stop cars on the M25 to allow protesters to sit down and block rush hour traffic.

It is clear that the police and the criminal justice system have come to the conclusion that, when it comes to environmental protest, the breaking of the law is not regarded as a big deal. That is why members of Extinction Rebellion seem to be regarded by the police as well-intentioned and precocious children rather than as what they are: zealous and intolerant law breakers who have little regard for the well-being of their fellow citizens.

In many circumstances, genuine protesters understand that their activity can get them into serious trouble. In some cases, they can get beaten up and in others they risk losing their employment. But, at least in the UK, the police have decided to treat environmental protesters as a protected species. The contrast between how they handled Extinction Rebellion and anti-lockdown and anti-vax protesters is striking.

Protesters against the lockdown were rarely treated with respect by the police. On the contrary, they faced the wrath of the criminal justice system.

Deputy Assistant Commissioner Matt Twist responded to the threat of disrupting London during the August Bank Holiday by stating, “We understand why this is such an important cause, no one is oblivious to that, what we don’t want is for people who are protesting to impact on the rights of others.”

When a leading figure in the Met goes out of his way to legitimise the activities of a group of people who want to bring life in London to a standstill, it’s obvious that they will be treated with kid gloves.

The British establishment regards Extinction Rebellion and other environmental activists as among their own. When they are arrested and taken to court, these activists seem to be held to a different standard than ordinary law-breakers.

It is not yet clear how much more freedom climate activists will be given to break the law and impose misery on the lives of the public. The footage of officers collaborating with the M25 protesters has forced Home Secretary Priti Patel to finally react, and she has ordered the police to get tough and prevent the continued disruption of traffic on the M25.

But don’t hold your breath. Given the attitude that prevails in the British establishment, zealous environmental activists will likely continue to be given a free pass. As long as their action is only directed at working people trying to get on with their lives, the police will continue to treat them with the affection shown to one’s own children.