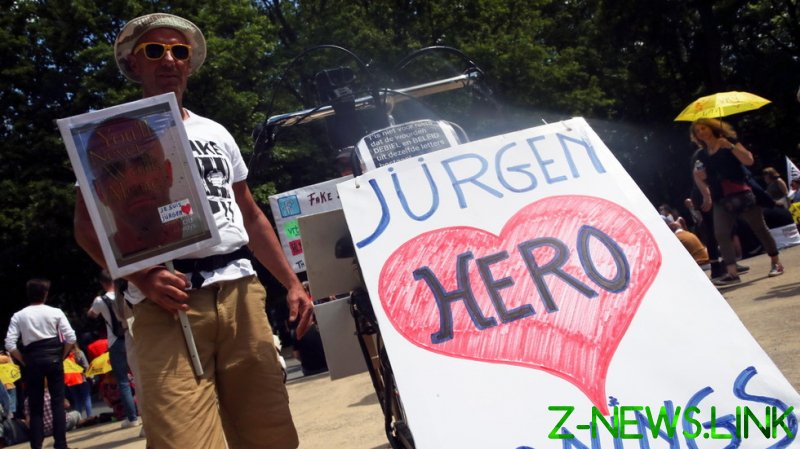 As the manhunt for a heavily-armed Flemish Rambo continues into its second month and with police seemingly no closer to finding the elusive former corporal, the saga has exposed Belgium’s deeply flawed political system that has left millions, just like the fugitive, feeling disaffected and ignored, and facing a democratic deficit.

As long as career soldier Jürgen Conings, 46, remains at large – and alive – the authorities fear he might come through with the threats he made in a note he left behind against Belgian virologist Marc Van Ranst, who remains in hiding with his family.

And although he was on a terrorist watchlist for expressing far- right views, the only offence Conings has committed since he disappeared is the removal of weapons from an army stock. But that hasn’t stopped the media stoking up fears over a ‘10-person hitlist’ he’d allegedly left behind.

Since May 17, the Flemish Rambo has become a lightning rod for the left-behinds of Belgium, not just for his right-wing allegiance, but for his anti-establishment views that are commonplace in the northern region of Belgium, as shown by the success of right-wing nationalist parties like Nieuw-Vlaamse Alliantie (New Flemish Alliance or N-VA) and Vlaams Belang (Flemish Interest) of which Conings is a former member.

The support for Conings morphed on to Facebook where a page declaring “As 1 behind Jürgen” attracted 50,000 followers before the tech giant decided to pull the plug and take it down amid fears that, somehow, this was encouraging violence.

Speaking exclusively to RT.com, Belgian Euro MP Tom Vandendriessche, a senior figure in Vlaams Belang, told me, “There was a lot of support for this guy with 50,000 people in just two or three days on a Facebook page. But these people are not supporting a terrorist.

“Conings has grown into something more; he has become a symbol of someone standing up against the government. However, I have the impression that he just flipped at a certain moment. He thought he needed to do something, eventually he did it and now he’s disappeared. It’s a tragedy.”

What drove Conings to this point however, is no mystery to the Belgian MEP. “We have had a lockdown of some degree for 18 months and people are dissatisfied with virologists, like Marc Van Ranst, and with the arrogance of the Belgian government,” he said.

“Nobody voted for Van Ranst and nobody voted for the Federal Minister of Health [Frank Vandenbroucke was lured into government out of retirement] so we are being governed by people we did not vote for and this is something which added to the atmosphere of public sympathy for this guy.”

Conings hit a raw nerve with the feeling of disenfranchisement that pervades much of the Belgian electorate. Despite becoming the second largest single party in the 2019 national elections, Vlaams Belang and fellow travellers N-VA (who were the largest) were denied government by a convoluted seven-party coalition after 16 months of horse-trading.

Understandably, many voters on the right remain disappointed at the outcome, which saw them win a combined 43 seats in the 150 member Belgian Chamber of Representatives only to be relegated to the opposition benches.

Despite strong election performances in the past, Vlaams Belang has been denied a role in coalition government thanks to other parties agreeing to a ‘cordon sanitaire’ upon a previous incarnation of the right-wing party for its extremist views. That has never been lifted despite questions over its validity, and a permanent shift in policy by the right-wingers. But all that might be about to change.

“One of the main topics at the moment is the big question over what will happen in the next elections in 2024,” said Vandendriessche. “If the polls are right and Vlaams Belang and N-VA combined have a majority in the Flemish parliament, I’m certain we will form a government, so the ‘cordon sanitaire’ will not exist anymore.”

They have been there before in 2018, when N-VA held out on forming a government with Vlaams Belang, believing they would be invited into a governing coalition, only to be rejected by the traditional parties and left with nothing.

“It was a complete breakdown of the N-VA strategy,” said Vandendriessche. “But now people are starting to realise that the traditional parties cannot be trusted, so they are turning to the right-wing Flemish patriotic parties. They then look at the result from the last election when they had a choice between us and N-VA and think ‘Well, N-VA was there with 33% and did not deliver.’ So they’re voting for Vlaams Belang.

“Opinion polls now say that 80% of N-VA voters can imagine themselves voting for Vlaams Belang, so we are looking at a maximum share of about 40% of all the voters in Flanders. So this is huge.”

With current polling having Vlaams Belang on a whopping 25 seats, five clear of second-placed N-VA, in the next elections, this would indeed be huge for Vandendriessche and his party colleagues. Huge for the left-behinds, the disenfranchised, the voiceless and the angry. And huge, indeed, for Belgium.