Home / policy / Who is a doctor, a butcher, stirred the hype around the case of journalist Golunova

Who is a doctor, a butcher, stirred the hype around the case of journalist Golunova 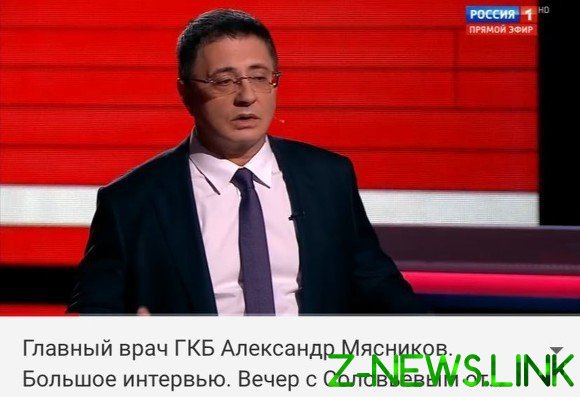 Millionaire TV presenter, friend of Solovyov and confidant of Putin “not out of obligation, but by conviction.”

“Golunov as a journalist I have a personal sympathy is not exactly (I, as you know, people are very conservative, still the USSR),” — wrote on Saturday in his Instagram Chief physician GKB № 71, Moscow Alexander Myasnikov, where examined Ivan Golunova, accused of attempted drug trafficking. The medic was heavily criticized, but it is not going to give up their words. Moreover, Myasnikov wrote two posts, and received even more severe condemnation. “Rosbalt Like” talks about — who is Alexander Myasnikov.

Alexander Myasnikov was born 15 September 1953 in Leningrad in a family of doctors, according to the official website of medic. Passed residency at the Institute of clinical cardiology named after A. L. Myasnikov, worked in Mozambique physician group of geologists conducting exploration in remote areas of South Africa. Since 1996 worked in the USA, he completed residency at the Medical center of new York state University, specialty “General practitioner”.

In 2000, the American Committee for medicine was awarded Myasnikov the title of doctor of the highest category. In 2009, butcher was the head doctor of the Kremlin hospital Administration of the President of the Russian Federation, but only worked a year. Then began his television career he became the leading program “have you seen a Doctor?” on NTV, and began to lead the medical category in the program Vladimir Solovyov on the radio “Vesti FM”. And in 2013, the butchers became the leading program “About the main thing” on TV channel “Russia 1”, which is a response to a similar transfer with Elena Malysheva on the First channel.

“On the most important” differed less controversial topics than the competitor with the first button, but some issues still surprise the audience. They note that the alleged butchers told me how she loves to drink and how to properly hangover.

“What’s that? I understand the fight against Smoking, but it would be better fought with drunks,” reads one of the reviews on the transfer.

Spectators say that the butchers with errors writes the names of diseases.

“We talked about STDs and he wrote made by the audience of the infection on the Board. And wrote “gardenella” instead of Gardnerella and several times and then repeating is the wrong word. Every doctor knows, as they say, and spell the word! And if hearing this for the first time,” says Victoria.

“And even wrote on the Board “trihomoniaz”! Shame on you, doctor! Do not touch the gynecology — leave it to the professionals,” Olga meets her (“Rosbaltu” failed to find free of these issues).

2010 butchers is the chief physician at Moscow city clinical hospital No. 71. In fact, before his career had nothing to do with the Moscow health; the doctor himself stated in an interview that the appointment was made “in agreement with one of the members of the government.”

“It was during the period when the Department of health of Moscow changed the power went Seltsovsky, came a new man (Leonid Pechatnikov — RB), which is the idea of public private partnership was close. And I was asked to choose a hospital. But ideas about what hospitals are, what condition they’re in, I was not. Once I went to the country where I live, and saw among the trees a building, similar to a hospital. Did not have good luck. Asked: “Can I the hospital?” I was told to wait six months — there’s the main doctor left for a new position, he was transferred, I was assigned to. It turns out that I just poked a pin in a map”.

According to income declarations posted on the website of the Moscow Department of health, the butchers — not the poor man. In 2018, he earned more than 14 million rubles. The chief doctor of hospital # 71 owns the land, dwelling house, apartment, non-residential premises, as well as two vehicles and two ATVs.

Butcher himself said that he was not a poor man, but any savings he has not.

“Everything goes to travel, a helicopter and the like. The apartment is old, 67 meters in house 1946 buildings. Cottage 100 km from Moscow, the plot is great, but home many would be regarded as poor,” he writes in his Instagram.

In 2018, the butchers became a confidant of the presidential candidate of the Russian Federation Vladimir Putin. In the program “live” Andrei Malakhov, he said that to be close to Putin during the anthem in the stadium was unforgettable.

See also:  Around the music festival in Kiev broke the scandal

“When you’re standing next to the President in such a situation, a feeling that you can do anything, nothing scary,” he said.

In his Instagram he said that he is a confidant of Putin “not out of obligation, but by conviction.”

“I like this man, I think it’s right what he’s doing (“and do you know another way to run the country, inhabited by the heroes of Dostoevsky?!”). I am for a strong cohesive country,” wrote butcher (spelling and punctuation preserved — RB).

He also noted that the Trustee of the mayor of Moscow Sergey Sobyanin, because he likes this man, his perseverance and character.

Alexander butchers regularly performs in programmes of Vladimir Solovyov, and the comments he makes not only on medical topics. So, in December 2018, he talked about the protests of the “yellow jackets” in France, the accidental witness of which was (the son Myasnikov was born in France during his work at the Embassy of the Russian Federation, is a student at the Sorbonne, studying to be a pharmacist).

“I saw with my own eyes that went two armored cars. People stand and sing the “Marseillaise” and they go to them. How does it look?” — he criticized the actions of the French authorities. And added that the persecution of Russia, “they missed something in the Kingdom of the French”.

Vladimir Solovyov, the head physician of hospital № 71 calls “friend”, most of whose views he shared.

Myself as butchers says he is not a Democrat or a liberal. 90-ies he considers a betrayal, and Mikhail Gorbachev and Boris Yeltsin — “criminals”.

“You can be angry, cynical, unbalanced. But very quickly I depart! Do not accept betrayal. There are “concepts”, they are for me often more important than “written” rules. If “portrait” it was not good, then maybe you should not stay me signed? Leave me with my, all the better,” concluded butcher.