Home / WORLD / Whatever Pence is planning, he destroyed his political career, and possibly the Republican Party, by tossing Trump under the bus

Whatever Pence is planning, he destroyed his political career, and possibly the Republican Party, by tossing Trump under the bus 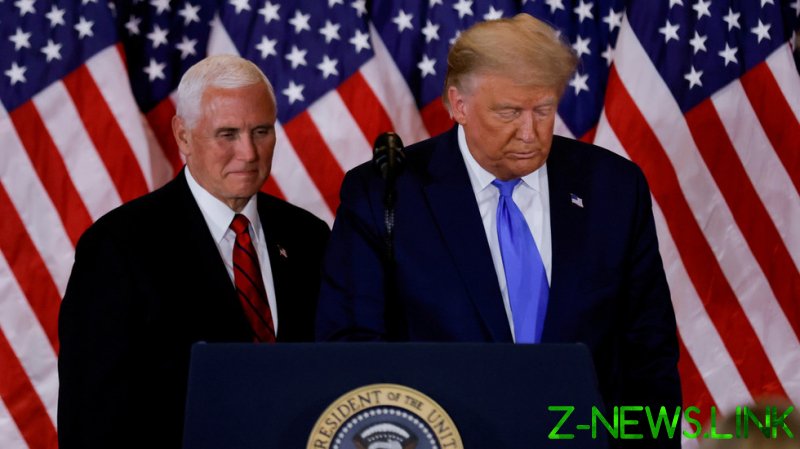 Even before the fences and barbed wire have been removed from around Washington, DC and the soldiers sent back to their barracks, America is already pondering its next squeaky-clean elections in 2024.

And in an effort to deliver the final coup de grace against Donald Trump, relegating the rabble-rouser to Google’s dungeon, the media is already promoting their preferred pro-establishment candidate, said to be testing the political waters for a shot at the White House.

“Former Vice President Mike Pence is beginning to build a political future without Donald Trump,” reported NBC News, quoting the ever-reliable unnamed sources. Pence was said to be “making plans to form a policy-focused fundraising committee that would help him maintain a relationship with donors… in case he decides to run for president in 2024.”

On paper, Michael Richard Pence might seem like a plausible replacement for troublesome Donald Trump on the 2024 Republican ticket, assuming, of course, that the US is still a viable democracy by that time and not a banana republic run by a decrepit tinpot dictator. Chances at this point look about 50-50. But I digress.

cBorn into an Indiana family of Democrats and Roman Catholics, the law school graduate eventually switched political allegiances after becoming enamored by “the common-sense conservatism of Ronald Reagan.” To further rock the Pence household, he also switched religious allegiances, becoming an evangelical born-again Christian, which has helped to formulate his staunch opposition to abortion as well as some aspects of the LGBT movement.

Still, there is something missing about Mike, that ineffable je ne sais quoi that makes it impossible to imagine him, for example, wagging a finger at the mainstream media in the crowd, as Trump did to fantastic effect, and calling them ‘fake news’.

In marked contrast to his former flamboyant boss, who packed stadiums everywhere he went like a veritable rock star, Mike Pence comes across as detached, colorless, and even slightly unlikeable. His cold demeanor, brought out in stark relief after four years of watching Trump the flashy showman, does little to excite the public imagination. Worse still, Pence does not seem to be endowed with the necessary amount of political intelligence, survival skills and courage to square off against the crazed fanatics that comprise the Democratic Party today.

That much became evident in the post-election fracas, when Trump was practically begging for Pence to halt the Electoral College count of January 6 following his claims of election fraud and irregularities in multiple states.

The otherwise loyal vice president, however, went rogue and ignored his boss’ pleas, as well as those of the 75-million strong Trump base that fully expected Pence to “do the right thing” and send the votes back for legislative review. Mike Pence stared into the future of his political career and blinked at the worst possible moment.

Now the duplicitous left-wing media is spinning the fantastic story that Trump was so furious with Pence for his disloyalty that he, in the words of the Guardian, “sent a mob to kill him.” The very same mob, incidentally, that the Democrats say Trump unleashed upon the Capitol building in an attempt at an “insurrection.”

Compared to the political dinosaurs who’ve been roaming around the DC swamp for many decades, Pence is a relative upstart. Had he remained loyal to Trump and halted the Electoral College process for further verification, there would at least have been some possibility that the results of the 2020 presidential contest might have been overturned in Trump’s favor. In that case, Pence would have emerged a hero with many Republicans and a shoo-in for the White House in 2024.

But even in the worst-case scenario, had Pence remained loyal to Trump at the moment of truth, and Joe Biden was still pronounced the victor, he would have at least saved face, as well as his political career. Indeed, there is a reasonable chance he would have been sworn in as president before his 70th birthday, which is something like middle age in Washington these days.

Perhaps Pence understood, finally, the full gravity of his tragic mistake when he rejected House Speaker Nancy Pelosi’s call for him to invoke the Twenty-Fifth Amendment and remove Trump from office before Biden’s inauguration on January 20. But by then it was too late. The damage was already done.

Yet the talk about a possible Pence presidency deflects attention from a major consideration, and that is that Trump – on the verge of being impeached for a second time by his enemies, this time around as a private citizen – is still very much the heart and soul of the Republican Party.

Without his presence, the party will simply cease to exist, at least for the foreseeable future. A simple visit to Twitter, even after the latest purge of conservatives, which did not spare Trump himself, provides all the proof one needs to support that assertion. In short, the Republican base is fuming mad, and Pence is certainly not the one to heal the internal breakdown. Trump’s popularity, even in defeat, remains an inconvenient truth that the media and even members of the Republican Party are at tremendous pains to admit.

What so many people tend to forget is that Trump spoke to the angry, populist mood of the country at a time when millions of Americans had lost trust in so many vital institutions, not least Congress, the media and even the American Dream itself. Thus, the popularity of the ‘Make America Great Again’ slogan.

As a political outsider, Trump had a clear understanding as to what the people wanted, which included the construction of a wall on the US-Mexico border to stop the flow of illegal immigration, the revitalization of the US industrial base, and a halt to the left’s strange fascination with cancel culture and its concomitant social experiments, many of them of a sexual nature, like the transgender movement, that do not exclude children.

These are populist concerns of the highest order that Trump promised to fix. By denying him a chance to revisit the results of the election, both Pence and the Republican Party are now adrift in shark-infested waters as the Democrats have taken full control of the ship of state.

So, in reality, the question is not whether Pence can win the Republican nomination for the 2024 presidential election, but whether there will be a Republican Party to speak of by then. Will Trump be forced to smash the two-party system and start his own populist party? Whatever the case may be, it’s not politics as usual in America. Some 75 million people have awakened, and they are not happy, least of all with Mike Pence.