Home / WORLD / What happened at the Capitol was bad. But the Democrats’ rhetoric of ‘sedition’ and ‘insurrection’ is paranoid and authoritarian

What happened at the Capitol was bad. But the Democrats’ rhetoric of ‘sedition’ and ‘insurrection’ is paranoid and authoritarian 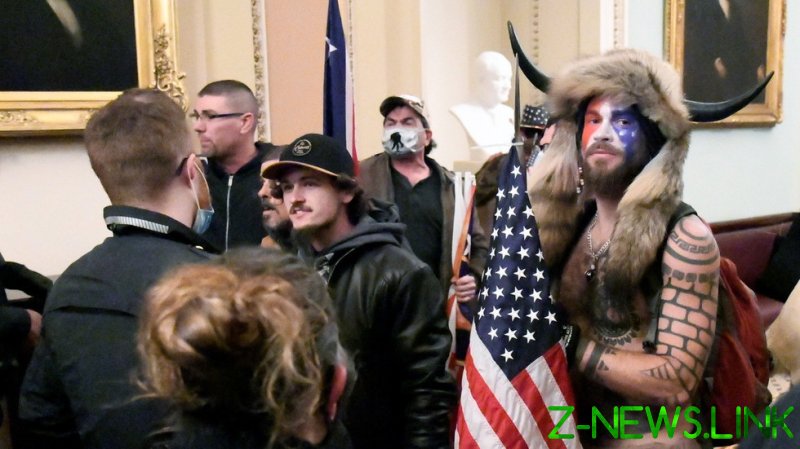 Come on, guys and gals, chill out USA. Calm down, calm down. You say you want to heal. Okay. The first thing y’all need to do is dial down the rhetoric.

A coup attempt, an insurrection, sedition – whatever wonderfully evocative term you care to reach for – is not some strange-looking dude with a painted face and horns on his head posing for the cameras inside the Capitol’s hallowed halls.

It’s not an incredibly dim, grey-haired bloke sitting in the House leader’s office chair and scrawling notes. It’s not a bunch of not-very-bright people tearing through the corridors of power with Confederate flags and MAGA hats stealing a laptop or two.

An armed insurrection is a leader pointing his army at the Capitol, and tanks driving up the steps and smashing through the doors. Rifle-wielding troops following up in its wake.

A coup d’etat would be Donald Trump pulling on his military fatigues and taking to the airwaves, sitting at the Resolute Desk and solemnly declaring he had taken absolute control for the good of the nation.

If the president was imposing martial law, then all these screaming people would have a point.

But he isn’t. And that’s not what happened. It simply is not what’s happening now, nor is it going to happen in the final ten days of Trump’s term.

Yet, take these words from incoming president Joe Biden: “Don’t dare call them protesters. They were a riotous mob. Insurrectionists. Domestic terrorists. It’s that basic. It’s that simple.” And Trump had “unleashed an all-out assault on our institutions of democracy.”

Oh, and he compared Trump’s sometime supporter Ted Cruz to Joseph Goebbels, Adolf Hitler’s propaganda minister, for fueling ‘the big lie’ of election theft that led to the riotous mob.

Even Trump’s own side waded in. Take failed one-time Republican candidate for the presidency Mitt Romney, who said as the riot unfolded: “What happened here today was an insurrection, incited by the president of the United States.”

American chat show hosts also had their say, with Jimmy Kimmel inviting viewers of his late-night show to “the treason finale of the Donald Trump era.”

And here’s the leader of Congress, Democrat Nancy Pelosi: “In calling for this seditious act, the president has committed an unspeakable assault on our nation, and our people.”

Trump has not – not yet, anyway – threatened any country with a nuclear attack. Yet Pelosi said she had spoken to the USA’s top military commander about “preventing an unstable president from initiating military hostilities or accessing the launch codes and ordering a nuclear strike.”

Here’s another. “What is being perpetrated is a rebellion and a treason. They will pay a heavy price for their treason.” Oh, hang on a sec though, that was actually Turkish President Recep Tayyip Erdogan following a – real – attempted coup in 2016.

“As of this minute, I decide to seize ruling power,” said the Thai military leader General Prayuth Chan-ocha when he appointed himself prime minister in 2014.

President Trump did not scheme and plot a coup on his Christmas break on the golf course. He fumed and sulked at his election defeat. He did not hatch a plot for his supporters to storm those hallowed grounds of Washington, he just craved their attention. He is hooked on the heroin of their adulation. He needs it. And he didn’t think about the impact of his words, because he never does – just check out his Twitter account. Oh hang on. He’s been booted off that.

There was no American coup. It’s hyperbole and four years of pent-up fury and score settling. The folk shouting the loudest simply despise The Donald the most, and they don’t much like his supporters either. They do fear them, though, because there are loads of them and these people – for some reason – adore their president. Biden, Pelosi et al will simply never get their heads around “why?”

It doesn’t matter. Trump is over.

The only genuine issue here is how the hell those people could get into the building and do what they did. And most of the people in charge of security have already fallen on their swords.

All this talk of nuclear codes and the 25th Amendment and impeachment is only turning Trump into a martyr. It’s pulling and scratching at the wounds the incoming leaders claim they want to heal.

President Trump only has ten full days left in office; he isn’t gonna nuke China or invade Iran. He couldn’t even if he wanted to – the American system is filled with checks and balances. Trump cannot roll over in bed in the middle of the night and accidentally press the big red button marked ‘nuke’.

Just chill, take ten days off, and it’s over. Done.