Home / WORLD / Western activists still blame Putin for turning his back on liberal dreams for Russia, but their promises led to nothing but chaos

Western activists still blame Putin for turning his back on liberal dreams for Russia, but their promises led to nothing but chaos 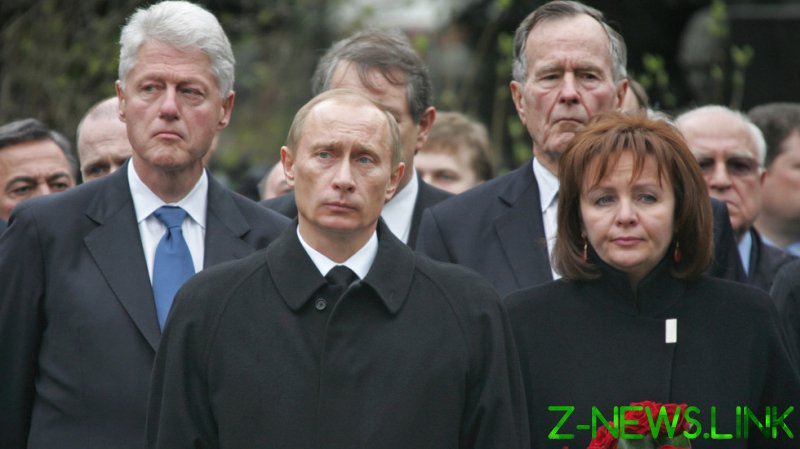 Anders Aslund, a former senior fellow at NATO’s Atlantic Council adjunct, has argued recently that Russians need to reconsider the achievements of the 1990s to set the country on the right path. The veteran lobbyist believes that the almost uniform condemnation of Boris Yeltsin and the liberalising, pro-market policies of his government during the 1990s by Russians has resulted in a failure to recognize the benefits of being pulled into the West’s sphere of influence.

In turn, his argument goes, focusing only on the ensuing chaos Yeltsin brought about means the country fails to recognise why current President Vladimir Putin has been, unbeknownst to Russians, such a disaster.

Aslund’s argument is important when it comes to understanding different narratives about post-Cold War Russia. The history and legacy of the 1990s should be at the centre of discussions around why those in the West and in the East take such a polar opposite view of the two visions for its future.

For the West, the storied 90s was a golden era for international affairs. The dominant narrative suggests that Russia under Yeltsin was democratising and integrating with the “International community”, until it was disrupted by Putin’s authoritarian character and desire to restore Russia as a great power. For Moscow though, the 1990s was a disastrous decade with social and economic collapse domestically, while Russia became increasingly isolated and humiliated internationally.

A reasonable case can be made about the achievements of Yeltsin. After decades of Soviet communism, preceded by centuries of Tsarist autocracy, Yeltsin made formidable efforts to open up and democratise Russia. Yeltsin’s effort to integrate and “return to Europe” has similarly been compared to Peter the Great’s effort to return Russia to Europe in the early 18th century. But what were the actual results?

The title on the front cover of The Atlantic in May 2001 outlined American expectations for the country after the 1990s: “Russia is Finished: The unstoppable descent into social catastrophe and strategic irrelevance.”

The country’s economy was defined by utter collapse as salaries diminished and were often not even paid, inflation destroyed the currency, and the brain drain intensified. The oligarchs robbed the country and transferred their plunder abroad. The social costs were also detrimental as life expectancy plummeted, families broke apart, while alcoholism, drug abuse and abortions reached utterly disastrous levels. As the nation began to fracture into ethnic identities and calls for secessionism increased, leading to war in Chechnya, Russia appeared destined to share the fate of the Soviet Union.

Strategic irrelevance was also a fair description of the marginalisation of Russia in international affairs. The West abandoned the idea of an inclusive security architecture for Europe, and Russia was seemingly the only country to be excluded from the new arrangements. Thus, NATO expansionism recreated the zero-sum dynamics of the Cold War. The US-led military bloc’s monopoly on security meant that the military alliance could ignore Russian security concerns and challenge the authority of the UN and international law, as evidenced by the invasion of Yugoslavia in 1999.

By the end of the 1990s, it was not unrealistic to expect that the Russian state would collapse and the country would Balkanize into smaller insignificant entities.

The narrative by the Atlantic Council, widely shared by the Western political-media class, appears inconsistent and paradoxical.

If Russia was believed to be finished and heading towards socio-economic collapse and strategic irrelevance after the 1990s, then what explains the positive assessment of Yeltsin and consistent condemnation of Putin?

Putin ended the rule of the oligarchs, nationalised much of the country’s resources, reduced poverty by half during his first term, created a relatively large middle class, imposed fiscal discipline and stabilised the currency. Life expectancy has increased rapidly, drug addiction is steadily declining, alcohol consumption has dropped more than 40% since 2003 and Russians now drink less than their German and French counterparts, and abortions are almost a quarter of the level they were at in 2000.

The strategic irrelevance of Russia has also undoubtedly been reversed. Moscow remains excluded from Europe as it was during the Yeltsin era, but it is asserting an independent position outside the West. Russia can enforce its red lines against NATO expansionism and regime-change wars as Washington backs away from Ukraine and the fate of Syria is largely made in Moscow.

Russia has inoculated itself from Western sanctions, and continues to deepen its strategic partnership with China to modernise its economy and integrate the Greater Eurasian continent.

Reasonable criticism of Putin’s administration can be made towards the failure to strengthen key institutions and sufficiently diversify the economy. However, the Western political-media class’ lack of recognition of the socio-economic achievements has a great impact on the peculiar narrative of Yeltsin versus Putin, as though a rosy vision of the nation’s future had been scrapped.

After the Cold War, it was commonly believed that the world had reached the ‘end of history’, and everyone who mattered would embrace liberal democracy under American leadership. Liberalism was subsequently promoted as a hegemonic norm given US dominance was believed to be the best guarantor of sustaining a democratic order. However, when democracy and hegemony are in conflict, the former consistently yields to the latter.

The fate of Russia’s democracy was grim at the end of the 1990s, and its foreign policy largely consisted of making unilateral concessions to Washington. After seizing control over the natural resources and strategic industries, the oligarchs used the money to take over the media and government – before being courted by Western governments and moving their wealth to the US or UK.

Yeltsin’s attack on Parliament in 1993 with tanks and subsequent centralisation of power in the presidency was deemed to be necessary by Washington. The US also brazenly interfered in Russia’s elections to ensure that an increasingly unpopular Yeltsin would stay in power, and the opposition Communist Party was kept out.

The contradictory narratives of the West and Russia around the 1990s are important to explore as they lay the foundation for the incompatible narratives about Russia under Putin’s leadership. If Russia faced socio-economic collapse, exclusion from Europe and strategic irrelevance when he took power, how do we assess now Putin’s legacy?