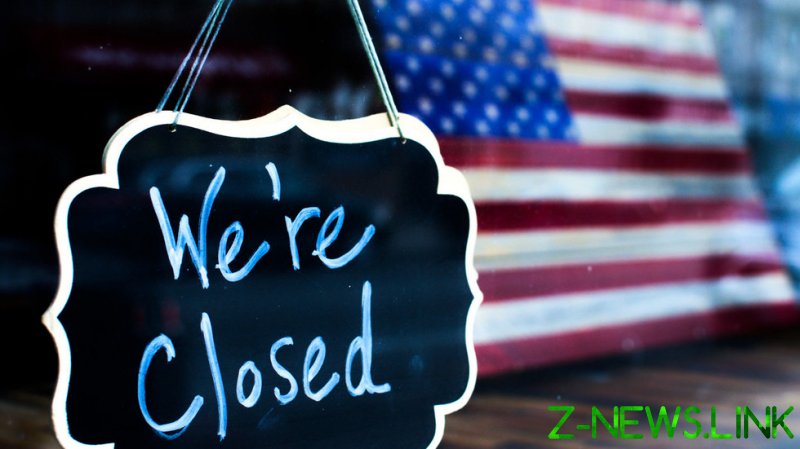 Karl Marx must be enjoying a hearty belly laugh right now as Uncle Sam, the ultimate poster boy for capitalism gone wild, is having difficulty luring the ‘proletariat’ into his workforce.

A brief stroll down Twitter lane, following the trending topic #WeAreClosed, makes it apparent that some revolutionary ideas are in the air that should give every hardworking American tremendous pause. Social media users are celebrating their newfound liberation from sweat and toil, congratulating themselves by remaining unemployed rather than slaving for the corporate beast, as it were.

“Corporations decided to cut worker hours to less than 40hrs to get out of giving benefits. People had to work two jobs just to get by,” wrote one angry user. “Then, they kicked everyone to the curb at the start of the pandemic. So yeah, tell us how much ‘people don’t want to work anymore.’”

Another irate Twitter user, Nate Terani, reminisced: “I’m old enough to remember my friends being furloughed w/o pay from their jobs in Arizona, one w a brand new baby, at the beginning of the pandemic. These businesses took action w/o any regard for its cruelty – Now they’re stunned that no-one is clamoring to return?”

Latisha Hordan wrapped it up succinctly by declaring, “We the people have spoken.”

Reading these heartfelt declarations from ordinary Americans, it’s hard not to feel some sympathy, especially since many of these people fell on misfortune through no fault of their own. Perhaps these testimonials even pulled at the heartstrings of some CEOs, now that several Fortune 500 members have started to loosen up their purse strings.

“McDonald’s, Sheetz and Chipotle are just some of the latest companies to follow Amazon, Walmart and Costco in boosting wages, in some cases to $15 an hour or higher,” AP reported.

Although the news agency labeled these raises “a boon to employees,” the increases are mere chump’s change compared to the windfall that corporate America received amid the Covid-induced lockdowns.

To put corporate America’s current spate of ‘generosity’ into the right perspective, Jeff Bezos, the founder of Amazon, and the extravagantly wealthy heirs to the Walmart chain “have grown $116 billion richer during the pandemic – 35 times the total hazard pay given to more than 2.5 million Amazon and Walmart workers,” according to a study by the Brookings Institution. In other words, thanks to the Covid lockdowns, the mega corporations control the Monopoly board more than ever before. Thus, this modest pay raise to workers – many of whom were previously and proudly self-employed – could be viewed as nothing more than a humiliating consolation prize, a cheap way for corporations to relieve their guilty consciences, assuming they have one, of course.

Last year, something like a neutron bomb went off along Main Street, USA, sucking the life force from once bustling business districts more effectively than any virus. Countless Americans were forced to close down shops that sometimes took a lifetime or even multiple generations to build. Many of those private enterprises will never come back, while the millions of families silently suffering as a result are stories that will never make it to the front pages of the corporate-owned media. No doubt their faith in capitalism, free markets, and individualism has been greatly shaken, perhaps even shattered. ‘Why start over again when another crisis could sweep it all away,’ they must be wondering. So yes, a certain degree of anger is understandable.

With that said, however, there seems to be another group of Americans, as evident on the Twitter fringes, who are using the pandemic as a means for excusing themselves from any and all personal responsibility. And here the US government must accept a large chunk of the blame. The first mistake, I believe, was taking the unprecedented action of shutting down small businesses in the first place. The second mistake was allowing the US government to, once again, act as private accountant of last resort, writing endless checks for Americans when jobs are clearly available.

It is truly hard to fathom, especially considering the fierce individualism that is said to give the US economy its edge, that 34% of US income now comes from charitable Uncle Sam. According to the latest Personal Income and Outlays data, which provides statistics on government-subsidized income such as stimulus checks, unemployment and welfare benefits, etc., subsidies exploded to a mind boggling annualized $8.1 trillion, double the $4.1 trillion subsidy figure from February.

Already it appears that (some) Americans are getting addicted to the idea of remaining on the government dole, and may not even be opposed to one day receiving a universal income, a proposal that has been kicked around by none other than Klaus Schwab and his Davos talk shop, the same group that sponsors the Great Reset (famously summed up with the Orwellian-sounding rule, “I own nothing, have no privacy, and life has never been better”).

The US government has already mailed out three rounds of stimulus checks – varying in size depending on personal situations – and some people are now anticipating if a fourth freebie will be arriving in the mail. It probably would not surprise anyone that many of those people requesting more cash handouts are Democratic politicians, whose cities and states they represent are floundering the worst under draconian lockdown regimes. What better way to conceal their utter incompetence than through the largesse of big government?

So before anyone jumps to the conclusion that Generation Z(zzz) and the Millennials have been up late at night perusing the Communist Manifesto, laying the groundwork for their own Red October, it’s important to remember that the United States, much like the rest of the world, is passing through a period of unprecedented upheaval. In other words, Generation Z is simply acting lazy because the government has trained them to act that way. While every country has addressed the challenges posed by Covid in their own way, I would argue that the American response has been one of the worst.

While there is nothing wrong with helping people when they are experiencing misfortune, the level of assistance being distributed by the US government – which will eventually have to be paid back since there is no such thing as free money – is conditioning a large segment of the population to a form of learned helplessness and super-dependency.

In a previous column, I argued that during the Great Depression, another crisis of epic proportions, the US government also subsidized the American people through the 1933 New Deal under Franklin D. Roosevelt. However, the main difference was that Americans were put to work on massive infrastructure projects, building dams, hospitals, highways, and bridges. Such work projects, which are certainly in big demand today, gave millions of people a sense of pride and accomplishment as opposed to one of desperate dependency. Sadly, that is not the case today, where millions of Americans have become charges of the state.

Ultimately and tragically, the American peoples’ fierce sense of independence and self-sufficiency will be the price paid for excessive government oversight that they’ve allowed in their lives – for pennies on the dollar.