Home / WORLD / ‘We had a good laugh’: Boxing king Josh Taylor on his meeting with Logan Paul, the love of his fiancee and Scotland at Euro 2020

‘We had a good laugh’: Boxing king Josh Taylor on his meeting with Logan Paul, the love of his fiancee and Scotland at Euro 2020 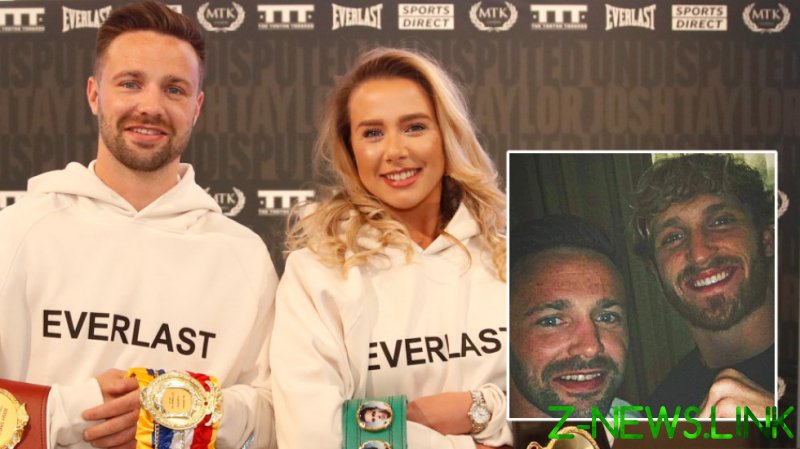 Long-term partner Murphy has backed Taylor since his earliest days in the sport, watching him rise to win the WBA (Super), IBF, and Ring titles in 2019.

The tough Scot then enjoyed the greatest win of his career last month, beating Jose Ramirez in Las Vegas to win the WBO and WBC belts.

“We’ve been together for a long time now so it’s just lovely to see how far he’s come from when we first got together and he was an amateur,” says glamorous Murphy, who will soon be Taylor’s wife.

“I told him he had so much left in the bag, to keep going and plugging away, even though it was hard. I told him there was so much on the horizon he had to look forward to.”

30-year-old Taylor admits he was once tempted to hang up his gloves prematurely. “[It’s hard] when there are times that you feel you’re doing it on your own and you don’t get results or whatever, and all your friends are away on holiday or buying new cars and this and that, when you don’t have any money to put petrol in your car and go to the gym,” he reflected of his earliest days as a professional.

“When you’re questioning stuff and thinking about giving it up and doing something else, it’s good to have someone there who will say ‘keep the faith, you’re doing well.’ It’s been really good.”

One man who has leapt into the limelight far more quickly – and far less deservedly, purists would argue – is American Paul, who recently faced all-time great Floyd Mayweather despite having almost no credentials in the ring.

“He came over and we had a good chat, a good laugh,” said Taylor, praising Paul after their chance meeting.

“It was good. That’s the watered-down version. We ended up sitting down for about 45 minutes. Logan Paul’s a very good businessman and he’s done very well for himself, so fair play.”

Many have questioned whether the celebrity bouts Paul and his fighting brother, Jake, have starred in make a mockery of proceedings.

“It’s good for the sport,” reckons Taylor. “It’s bringing new audiences in and new interest and stuff like that. It’s new sets of eyes, new fans.

“The people who are following Jake and Logan Paul are young kids. I don’t know what they do on their YouTube but if a few of their fans, followers and subscribers start following the sport then it’s only good.”

Perennial winner Taylor now wants Scotland’s footballers to follow his lead by beating Croatia on Tuesday to potentially earn qualification for the round of 16 at Euro 2020, in which they impressed in a goalless draw with England at Wembley on Friday.

“We played very well and we were unlucky not to win,” he feels. “They did very well and proved they’re a strong side, giving a good account of themselves. We have to win tonight and I think we can and we will.”