Home / policy / “We are the power!” Residents of Khabarovsk three weeks out for spontaneous rallies and marches

“We are the power!” Residents of Khabarovsk three weeks out for spontaneous rallies and marches 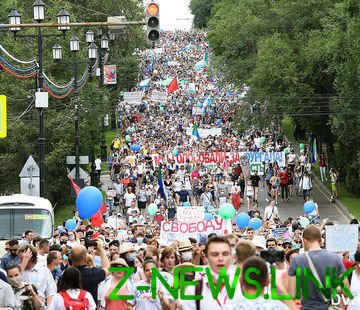 In Khabarovsk, on the evening of 31 July to the spontaneous rallies and marches in support of Sergey Furgala and against the appointment of the acting Governor of the Khabarovsk Krai Mikhail Degtyarev. It’s already the 21st day of protests.

The townspeople gather in the square near the building of the regional government and discussing the political agenda. The stream from the event is the local headquarters of the Bulk. From Lenin square, the protesters are going by tradition, almost a procession through the main streets of the city.

Today it became known that the court was arrested for seven days blogger Alexei Romanov, who on his YouTube channel was covered by spontaneous rallies in Khabarovsk. On the eve of the hunger strike, the driver of “Fullmobile” Rostislav Buryak, who was arrested for eight days on charges of obstructing traffic on the protests. Earlier for participation in the meetings, the courts have fined MP from the Communist party Sergey Ilyin and the Secretary of the Khabarovsk branch of the libertarian party Artem Mozgov. Reports are filed on other activists.

Khabarovsk authorities urged not to drive their children no meetings because of the “psychological danger”. Local media reported that residents also began to receive official warnings from security officials about the inadmissibility of participation in unsanctioned protests.

Large-scale spontaneous rallies and marches take place in Khabarovsk on a daily basis, starting from July 11. People are unhappy with the arrest of the former head of the region Sergey Furgala, who is suspected of murder 15 years ago. Vladimir Putin dismissed Furgala with the phrase “in connection with loss of trust”, appointed acting head of the region, his fellow party member Mikhail Degtyarev. However, the festival is also not much. The degree of discontent grew after Degtyarev said that the organization of the meetings involved some foreign nationals who are “rocking” the situation in the region. Sound slogans “We will not surrender!”, “While we are uniform — we are invincible!”, “Our land — our truth!” and “We are the power!”. Also Khabarovsk chanting “Putin resign!”.