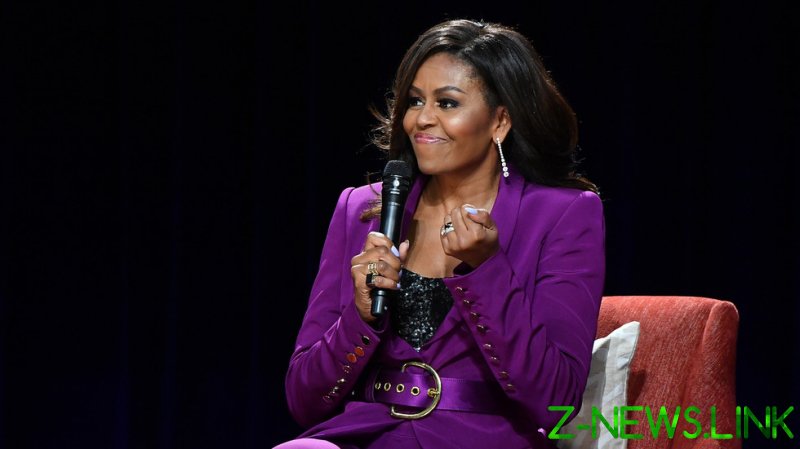 I have tried to keep quiet about my opinions about Michelle and Barack Obama, even though many in my circle make fun of them or call them out for their hypocrisy and blatantly racist acts. However, her latest video goes way too far for me to remain silent any longer.

I’ve heard time and time again how Michelle is the most admired woman in the world. That should scare the crap out of everyone with a working brain.

She continues to be passive aggressive when talking about President Trump and associating him with racism. She won’t outright call him racist, but her words are like a dagger, and a thousand cuts usually follow.

When I ask people to name a specific, actual, factual account or occurrence of Trump making a “racist” remark, no one can give me an example. I would like for someone to call out the MSM and ask them to do the same, but alas, in their tight little cocoon, they all spout the same false rhetoric, so it will never happen.

What is ironic to me is this woman’s husband became president of the United States strictly on the basis of his skin color, nothing else. They know, I know, and most black Americans know it as well.

They both are now millionaires only because of that presidency. Now they are talking about racism! The Obamas, Oprah, and many other black millionaires who got rich off of white people (because they sure as hell didn’t get rich off of black people) have the audacity to insult my intellect with this rhetoric of racism. Racism has become a cliche, and that’s about it.

Booker T. Washington wrote about this virtual army of self-promoting race-baiters well over 100 years ago:

“There is [a] class of colored people who make a business of keeping the troubles, the wrongs, and the hardships of the Negro race before the public. Having learned that they are able to make a living out of their troubles, they have grown into the settled habit of advertising their wrongs – partly because they want sympathy and partly because it pays.

Some of these people do not want the Negro to lose his grievances, because they do not want to lose their jobs… There is a certain class of race-problem solvers who don’t want the patient to get well, because as long as the disease holds out they have not only an easy means of making a living, but also an easy medium through which to make themselves prominent before the public.”

Per her own words, Michelle was never proud of America until her husband was nominated to be the Democratic nominee. And now her unhinged screed in the video she released does not elevate black Americans with empowerment, but tells them to suppress their abilities, hopes, and dreams, and progress by donning the mentally- and spiritually-constricting burden of victimhood.

Michelle still doesn’t understand or want to believe that black Americans who no longer see themselves as victims tend to leave the party of black victimhood behind. Like any good Democrat, she only cares about black votes, not black people.

If you watched her video, you would have noticed her saying something ignorant like “only a small minority of the protests were violent” or words to that effect. This completely ignores the fact that the flame from the match that starts a huge, uncontrollable wildfire is less than “10 trillionths” of the flame that results from that one match.

A little bit of truth here. Before Donald Trump ran for the Republican presidential nomination in 2016, the leftists courted him. They went to his parties and invited him to theirs. They cozied up to him and his money. He was their friend. Now they hate him and have branded him as a liar, racist, and misogynist, but he was none of those things before 2016. Michelle Obama lied in her video, but that is not surprising. She is, after all, a Democrat.

Actually, the “black and brown” people of whom Michelle speaks are not going to engage in the downfall of this country; they will help save America by turning in droves away from the liberal progressive agenda and voting for President Trump and other conservative politicians who reflect and embrace true family values.

I’m seeing more and more minorities reject the liberal, socialist agenda having realized that the left DOES NOT reflect their traditional values of religion, the nuclear family, and getting ahead by hard work.