Home / WORLD / Wayne Dupree: California’s dreaming of a Gavin Newsom-free future – his harsh Covid lockdowns have been a dismal failure

Wayne Dupree: California’s dreaming of a Gavin Newsom-free future – his harsh Covid lockdowns have been a dismal failure 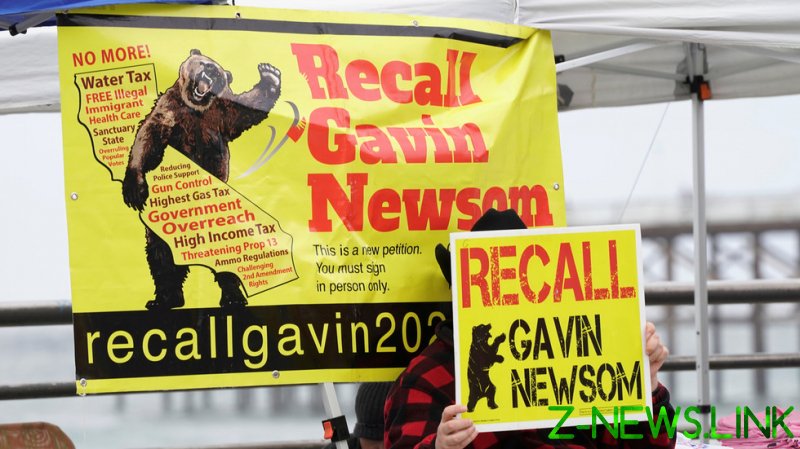 The effort to recall Gavin Newsom has collected more than two million signatures, which, according to the state rules, are more than enough needed to to move forward, provided they are verified.

My feeling is that the businessman-turned-politician is done as California’s governor. You saw his panicky, authoritarian actions during the early part of the Covid-19 situation, and he looked out of his depth. I have the benefit of knowing people who’ve worked directly with the man. Newsom just isn’t competent; in normal times, this hasn’t been so visible, but his lack of capability hampered him in times of crisis. He resorted to a dictatorial approach, and doubled down on that approach when it didn’t work.

Another thing Newsom doesn’t understand is statistics. California has fared no better or worse in the pandemic in terms of cases and deaths than other large states (at least other Democrat-run ones like New York). But that suggests that his draconian rules didn’t make Californians safer – but it sure did make them poorer.

Newsom is proof that the more corrupt and incompetent you are, the more of a Democrat/mainstream media rock star you become. The truth is catching up to all these phonies and crooks across the nation. The American people are not becoming woke – we are waking up and seeing the damage politicians have done across the land. Throw them all out of the office.

I came of age in 1980, meaning that I’m a child of the seventies. Back then, California wasn’t just part of the American dream; California was the American dream. It was the fashionable horizon the rest of us aspired to. But after 30 years of liberal rule, California now needs walls to keep its hapless victims in while the saner parts of the country need walls to keep them out. California is now the horizon Americans don’t aspire to; the Golden State is tarnished and a national embarrassment.

The question is if the liberals have learned anything. We other Americans certainly have.

Take the case of so-called Republican Arnold Schwarzenegger, who won the governorship in a recall that booted out Democrat Gray Davis in 2003 for wanting to give drivers’ licenses to illegal aliens. Needless to say, Schwarzenegger betrayed voters by coming out for the same policies that brought down Davis. Instead of terminating the Terminator in 2006, Californians re-elected him, proving they aren’t responsible enough to be school-crossing guards for the local elementary school. The only thing that got this phoney out of office was California’s term limits in 2011.

As LA Magazine’s valedictory piece on him in 2011 pointed out: “As Arnold Schwarzenegger steps down this month, California voters can only marvel that a leader of such apparent strength is leaving the Golden State such a weakling – its institutions eroded and its finances more of a mess than when he took over from Gray Davis after the 2003 recall. Even among Schwarzenegger’s earliest detractors, few would have dared to predict that by his last summer in office, the governor who had entered the statehouse a movie star would bottom out with a 22-percent public approval rating, tying Davis for the lowest recorded approval rating in California history.”

Now, compare this supine behaviour of California voters to how real Americans act when we are betrayed. How many people are happy with Pat Toomey? Toomey was installed as a Pennsylvania Republican senator in 2011 after a post-American liberal traitor named Arlen Specter was thrown out of office. Unlike liberals that only beg for more, after Toomey has shown himself to be every bit as bad as Specter was (and voted for Trump’ second impeachment), we Americans are going to do everything in our power to effect the removal of this traitor.

In the 2016 election, we Americans showed the world that our votes are no longer for sale to actors or those who have sold their souls to our liberal elite enemies. It’s why we chose Trump, instead of a Jeb Bush or a Marco Rubio. Unlike liberals, we Americans now demand that our elected officials protect and promote the interests of our country and our citizens. The question is whether liberals will demand that anybody’s interests other than those of billionaire liberal elites are protected and promoted. I fail to see where liberals have learned anything. I only see them getting worse.

It’s always a hoot when Democrats claim to be the party of “science.” There was no “science” at all behind Covid-19 when it came to our shores. It was a completely unknown disease, and nobody knew what it would take to stop it. Yet those who were already in favour of more government control over society, and fewer freedoms, were quick to embrace lockdowns, even though there wasn’t any proof, scientific or otherwise, they worked. It’s like with climate change –  there is no scientific proof that shutting down energy production and usage worldwide will cool off the planet.

The only “science” that Democrats truly believe in is the “social science” of exerting power and control over people’s lives… mostly to benefit the elite and powerful, at the expense of human dignity and freedom.

Covid is China’s fault, but California is Newsom’s. It was China where the virus broke out; it was China which hid the outbreak; it was China who twisted the arms of the World Health Organization to state last year that the virus could not be easily spread and that it was not necessary to stop Chinese nationals from entering America and other countries. When Trump became the first world leader to stop flights from China to halt the spread, Newsom’s party accused him of racism and xenophobia.

Who has benefited most from Covid? Of all the countries in the world, the one most to benefit was the one releasing the virus. First, Covid caused the removal of the only world leader to go against China. It necessitated a huge number of medical supplies and equipment orders, most of which came from China. It caused a steep contraction in the US economy, which moved China one step closer to its goal of being the world’s top economy.

Yet Newsom and his party act as the unknowing shrills of China’s Communist government. The pushing of the climate-change agenda restricts US energy production, and most alternative energy sources and components are produced in China. By destroying America’s largest potential export and replacing it with exports from Beijing, China will certainly soon surpass the US economy. The Paris Climate Accord requires America and Europe to cough up trillions to China in subsidies.

This recall of the governor should also have happened in several other states. My hat goes off to those remaining Californians – yes, there are still some Republicans and other level-headed people in the state – that had the wherewithal to gather this petition. Newsom’s restrictions over Covid were oppressive and unnecessary – witness how Florida, without lockdowns, did so much better. There was no reason for Newson’s lockdowns except to show his power. It is not science. It is all about the power of oppression and it is time for the people of California to be heard. Recall the man now.