Home / WORLD / Wayne Dupree: Biden must get tough on border policy like Trump, or America is in danger of collapse

Wayne Dupree: Biden must get tough on border policy like Trump, or America is in danger of collapse 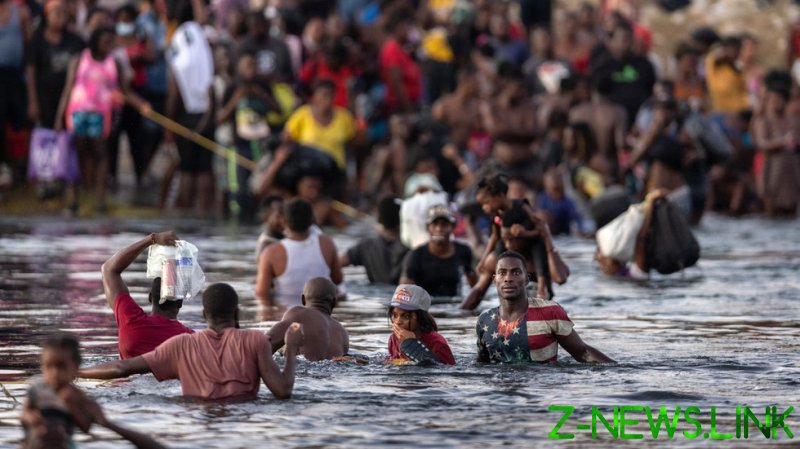 The United States’ migrant crisis shows no sign of abating. First, they come by the thousands, illegally, and once settled, the second wave arrives with family and friends. And so the cycle continues. Yes, America is the land of freedom and opportunity, but open borders are a recipe for disaster; the US cannot be a free pass for everyone living in a third-world country. This mass exodus into our land is becoming unsustainable and reaching breaking point.

In eight short months, we have watched Joe Biden dig one deep political hole after the other for himself, so much so that his damage control handlers can’t keep up. Any sane, rational person with eyes can see what’s going on at the southern border, and it’s tragic. There’s no hiding how the Democrats are prepared to push their warped ideology come what may, no matter the cost to American citizens.

Why do I bring the Democrats into the conversation? Because their position on immigration is one of the biggest threats to Dem candidates retaining the House and capturing the Senate in 2022. It’s that stark.

Yes, we are an independent free country, but that does not mean we should be a nation that the rest of the world walks over. We have laws BECAUSE we are a free country. When our President ignores those laws and fails to enforce them, as we have seen happen at the border, we are no longer a free, independent country. And so it is fair to say Biden is destroying America.

In his election campaign, he gave people the belief that they would be welcomed with open arms if he was elected over Donald Trump, and so it’s no surprise that we now have thousands of non-Americans spending their hard-earned dollars and pesos to get here based on that belief.

But Biden does not care. To him, those illegally crossing are potential future Democrat voters who will be enticed with generous benefits. Nor does it seem to matter that they could be criminals, drug lords or terrorists. They don’t even have to get the vaccine, either.

Even worse, this is costing us taxpayers a ton of money – money that could be useful elsewhere. This administration does not work for the people, and I wish many more of us could see this.

Anyone in support of the Biden administration  – I would have said Biden, but we all know he is not calling the shots – seems to have the ultimate goal of a fundamental transformation of the USA. If Biden knew what leadership was, maybe he would take up the mantle. but sadly, the man’s idea of leadership is having an ice cream or riding his bike as a humanitarian crisis unfolds on our Southern border. Maybe the Commander-in-chief forgets he has a nation to run?

The Leftists in our government seem to want to transform America into a socialist paradise, and the situation at the border is just one part of their plan to create chaos and division. As all followers of Karl Marx know, they must first destroy America before they can rebuild it in their image.

I am not exaggerating when I say I fear this nation is very close to collapsing, and the cause it will not come from outside but from within. Back in the late 1800s and early 1900s, there were many immigrants from Europe, all of them processed at Ellis Island. Many of them fought and died under the American flag in World War I and World War II. These people would rather die than go on welfare, which at that time was called “relief”.

Now the situation is very different. We let people enter the country illegally and then use taxpayers’ dollars to house them, feed them and give them free healthcare. Many might end up breaking the law. Is it any wonder I fear for the future? And when the collapse comes, elections will be a thing of the past – it will be dog-eat-dog, and only the strongest will survive.

More than ever, our nation truly needs a strong leader, and those Democrats intent on destroying America must be stopped.