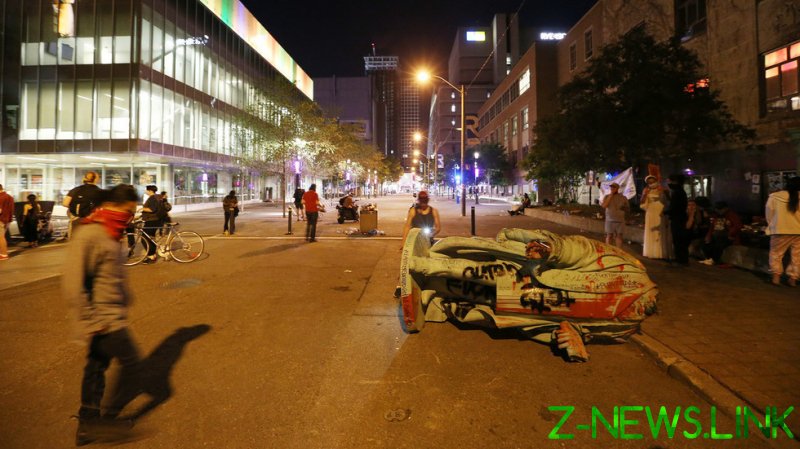 The incident occurred on Sunday following a rally held at Ryerson University in downtown Toronto. The demonstration was held in response to last month’s announcement by the Tk’emlúps te Secwépemc First Nation about the potential unearthing of the remains of some 215 children buried on the site of a former residential school in the British Columbia province.

According to a statement by the university, more than 1,000 people had participated in the nearly four-hour protest and march. While no incidents were reported during the event, a “truck arrived” about “an hour” after the protesters left and “proceeded to pull down the statue.”

A widely-shared video posted to Twitter by ‘CaptCanuck – Antifa Intel High Command’ with the caption “Today was a great day!!!” appears to show a rope being used to pull down the statue and people cheering as it fell off its pedestal.

As documented in a series of videos posted by lawyer Caryma Sa’d, protesters then used buzzsaws and sledgehammers to remove the head, which was apparently placed at the feet of a residential school survivor and thrown into Lake Ontario. It was then retrieved for indigenous land claims campaigns.

In a statement on Monday, Ryerson University President Mohamed Lachemi said that the statue “will not be restored or replaced.”

The statue, which had been a flashpoint for years, was vandalized earlier last week – with unknown parties defacing it with red paint and graffiti that read “show the world how many of us you have murdered,” “dig them up,” and “land back.” Children’s shoes were also placed in front of it.

Over the past decade, the university has addressed the issue, acknowledging Ryerson’s role in designing the residential school system, which was intended to forcibly convert and assimilate indigenous children into Canadian culture but was plagued by physical and sexual abuse instead.

The co-chairs of the university’s Standing Strong (Mash Koh Wee Kah Pooh Win) task force – which is examining how best to come to terms with Ryerson’s legacy – released a statement on Monday. The fate of the statue was among the subjects under its purview.

“With the statue removed, there may be regrets that the many students, faculty, staff and community members who have worked tirelessly towards its removal were not offered the opportunity to witness the moment it came down,” read the statement attributed to Joanne Dallaire and Catherine Ellis.

Recognizing that the “absence of the statue does not reconcile Egerton Ryerson’s legacy,” the co-chairs said the task force would continue its work and “provide our final recommendations regarding principles of commemoration, the university’s name, and other elements of commemoration on campus” before the fall semester begins in September.

Toronto police are said to be investigating the incident. Prior to the demonstration, the department had tweeted that despite the “traumatic impact” of the discovery of the mass grave, “acts of vandalism/violence” would not be tolerated.