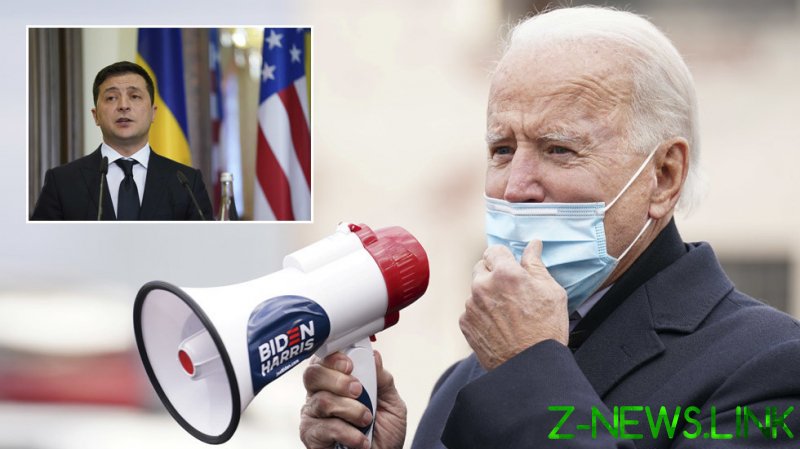 In a statement issued on Twitter Wednesday, the American embassy in Kiev wrote that it “supports efforts yesterday to counter Russia’s malign influence.” It described the shuttering of broadcasters as “in line with [Ukrainian law], in defense of its sovereignty and territorial integrity.”

“We must all work together to prevent disinformation from being deployed as a weapon in an info war against sovereign states,” the missive concluded.

Earlier that day, Zelensky signed into law a decree that took a total of eight news outlets off the airwaves in a move backed by the country’s National Security and Defense Council. However, the claim of nefarious Russian influence was met with skepticism, given that the outlets are based in Ukraine, where they are operated by and watched by Ukrainians.

In addition, the group is owned by one of the country’s elected MPs, Taras Kozak. Authorities also say they have ties to political leader Viktor Medvedchuk, who heads up the country’s largest opposition party, which is called “Opposition Platform – for Life.”

In a furious statement published on Wednesday morning, Medvedchuk wrote that the move to suppress opposition-leaning media was “absolutely illegal” and amounted to the use of “violence, bullying and coercion against dissent.” He noted that the decision came amid tumbling approval ratings for Zelensky and fierce criticism from the opposition over a lack of access to Covid-19 vaccines.

Later on Wednesday, one of the bloc’s MPs announced it would begin the process of trying to impeach the President following the crackdown.

Mikhail Podolyak, an adviser to Zelensky, explained the move, saying that “it’s clear that sanctions on Mr. Medvedchuk’s TV channels are not about the media and not about freedom of speech… it’s just about effectively counterfeiting fakes and foreign propaganda.” Without action, he argued, the opposition media would “kill our values.”
However, the EU broke ranks with Washington on Wednesday, sounding the alarm over the potential consequences for basic human rights in the country. Foreign Diplomatic Service spokesman Peter Stano told Interfax-Ukraine that attempts to regulate against disinformation “should not happen at the expense of freedom of the media and should be carried out with full respect for fundamental rights and freedoms and in accordance with international standards.”

More commentary around the decision came from an unexpected quarter. Aleksandr Zelensky, the president’s father, told the Strana news outlet that he had tuned into the channels that his son had just banned, adding that he was “worried” about his son. Asked whether he was concerned about constraints on free speech though, he said that “there are limits to everything.”

One Twitter user sought to contextualize the row for an international audience, saying that “for US folks, this would be more or less the equivalent of Biden sanctioning Fox News, OAN, and Newsmax.”

There had been hopes among Washington’s traditional allies that Biden would play a more active role in the promotion of human rights overseas than his predecessor, Donald Trump.
In November, American media reported that an official in Biden’s transition team, Richard Stengel, backed new restrictions on free speech. “All speech is not equal. And where truth cannot drive out lies, we must add new guardrails,” he wrote in a cryptic Washington Post op-ed, giving Russia as an example. As team leader of the US Agency for Global Media, Stengel was responsible for developing policy for Washington’s state-run media machine overseas, including outlets like Voice of America and RFE/RL.