War is peace, segregation is ‘diversity’? A Chicago mayor banning white reporters proves the US has entered dangerous territory 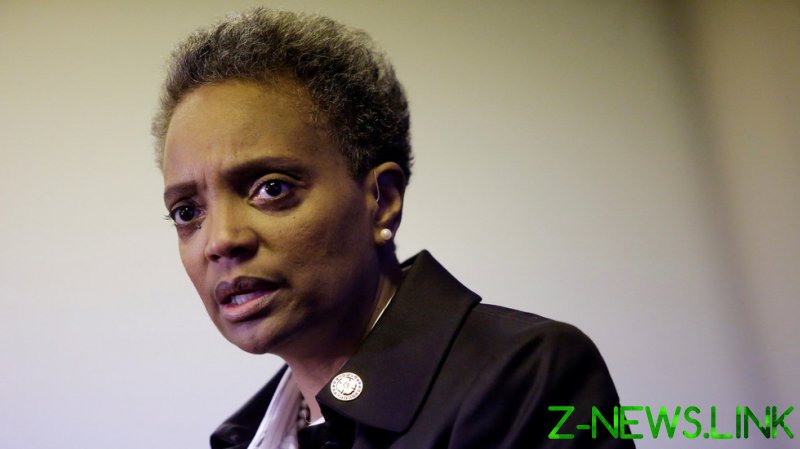 The sheer audacity of the US progressives, who have been on a crusade to stamp out any and all manifestations of ‘systemic racism’ and ‘white supremacy’ in the United States, could not have prepared anyone for the shocking display of bigotry committed by none other than the leader of Chicago, America’s third-most populous city.

On the second anniversary of her imperial rein, Mayor Lightfoot, flying the tricolor of “Inclusivity, Diversity and Equity,” boldly crossed the racist Rubicon, laying bare her total disregard, if not disgust, for that pale-faced tribe of natives that makes up almost 50 percent of Chicago’s population of 2.7 million, and over 70 percent of the national total. Yes, you guessed it. The white Caucasian race, that, overnight, has become the scapegoat for every single headache now plaguing the nation.

“I ran to break up the status quo that was failing so many. That isn’t just in City Hall,” Lightfoot wrote in a tweet that looks set not to age well. “It’s a shame that, in 2021, the City Hall press corps is overwhelmingly White in a city where more than half of the city identifies as Black, Latino, AAPI [Asian Americans and Pacific Islanders], or Native American.”

In the thread of responses that followed, the mayor attempted to justify the move by saying it had been made in the spirit of “inclusion and diversity” – a slip on a mental banana peel if ever there was one. Only in these days of wokeness gone mad could any person equate full-blown racism and segregation to ‘inclusiveness’ and fail to see the irony. Who knows, perhaps had the Ku Klux Klan tempered their repulsive actions with just the right euphemisms and semantics they too could have curried favor with the public?

A perusal of the hundreds of responses to the mayor’s ill-advised actions indicates that many viewed it as “reverse discrimination.” Personally, I am not buying that. It requires only a five-second thought experiment to predict the fate of any white official who dared to ban a group of journalists (journalists!) based on their black or brown complexions, for example. Yet, for whatever reason, it has become fashionable among the business and political elite to blithely denigrate the white race and send them to the back of the bus, so to speak, with total impunity.

Tellingly, the lone conscientious objector to Lightfoot’s decree was Latino reporter Gregory Pratt, who said he’d been privileged to have been granted an audience with the Chicago queen, but, after she’d refused to recant her banishment of white reporters, to his eternal credit, he’d rejected the invitation.

So, why did Lightfoot feel the need to telegraph her shameful intentions in such a vulgar public display? Could it have anything to do with the fact that Chicago has been witnessing a massive spike in murder rates on her watch and she’d previously declared Chicago a “sanctuary city” for illegal migrants seeking refuge and was now trying to deflect attention from that story? If so, what better way to do that than ‘pack the bench’ with reporters who would be more inclined to show her sympathy.

In any case, while it seems reasonable to have a conversation about the purported lack of minorities in the press corps, for Lightfoot to have resorted to 1960s-style segregation tactics to make her point was not only mind-blowingly stupid, but incredibly dangerous. Even before George Floyd died under the knee of a white police officer, a campaign had been building against ‘systemic racism’ in the US. The fact is, however, America faces more of a threat from the systemic lying emanating from the corporate-owned mainstream media, which has been working 24/7 to fuel the contrived racist narrative that serves to divide the nation and lend credence to groups prone to violence and vandalism, such as Black Lives Matter and Antifa.

Are there racists in the US? Of course there are, just like there are racists in every country. And these detestable bigots are representative, it is crucial to note, of all races, colors and creeds. Yet, thanks to the liberals’ revival of ‘critical race theory’ at both academic and governmental level, the country seems to be under the illusion that white people are born with some sort of a genetic defect – unobservable under a microscope – that makes them especially predisposed to bouts of xenophobia, bigotry and racism.

It’s exactly the sort of uber-rubbish that allows true xenophobes, such as Lori Lightfoot, to escape any sort of consequences for their own peculiar brand of racism. It’s also the sort of mentality that could lead the US into its very own genocide somewhere down the road, if it’s not careful.

Lightfoot’s remarks are a form of passive aggression against the thousands of white American journalists who have taken all the necessary steps and put in all the hard work towards fulfilling their life goals, only to be turned away at the critical moment due to their skin color. And it promises to get worse now that Ms. Lightfoot has thrown down the gauntlet to the local media. Now, news organizations who wish to cover City Hall will resort to a mindless quota-filling exercise when hiring and firing journalists, instead of basing future hires and fires on time-tested criteria, such as academic achievement, experience and other professional credentials, regardless of color.

It is vital that the US nips these public displays of racism in the bud before people start considering them the norm. It’s already happening. In February, the Coca-Cola company came under fire for a training video that encouraged staff to “try to be less white,” to which the black American commentator Candace Owens remarked: “If a corporate company sent around a training kit instructing black people how to ‘be less black’, the world would implode and lawsuits would follow.”

Evil raises its head when people of any race are publicly singled out and made to feel guilty for their success in any field. That’s when the country has entered dangerous territory and a very real and menacing racism could suddenly emerge from where there was none before. Lori Lightfoot should be punished for her dangerous display, either through a bipartisan investigative committee or at the ballot box. There is simply no place in modern American politics for 1960s-style bigoted thinking.