Home / policy / Voting on amendments is conducted in buses, trunks of cars and on the benches in the yards

Voting on amendments is conducted in buses, trunks of cars and on the benches in the yards 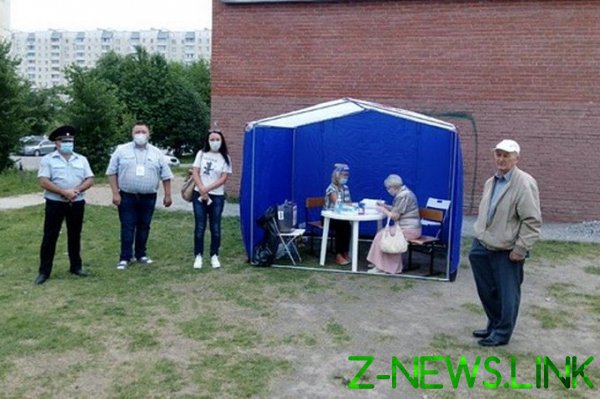 “Thought seeds are traded, and was wick”

Voting on amendments is conducted in buses, trunks of cars and on the benches in the yards

In Russia, on 25 June, began voting on amendments to the Constitution, which will last until July 1, inclusive. The basic law of the country it is proposed to make more than 200 changes, the key of which — “zeroing” of presidential terms of Vladimir Putin. In the newsletter there are no separate items for each amendment, you can vote only for the entire package of changes. The question is: “do You approve the amendments to the Constitution of the Russian Federation?” The answer can be “Yes” or “no”.

A plebiscite in the regions is different. Because of the threat of further spread of the coronavirus voting is organized not only at the polls but also on the streets. The selection of sites under the sites, often causes the citizens questions.

In the Novosibirsk region, for example, a site for voting on amendments to the Constitution in settlement Linevo of steel benches in the courtyard.

In the same way they did in Pushkin (Leningrad region). “Mobile weekend will move along the house during the day. People encouraging you to vote via megaphone”, — eyewitnesses report.

In Tver electoral Committee is located in the passenger bus.

And in one of the districts of Vladivostok the vote today carried out directly in the trunk of a car. “We thought at first that sell seeds, and the turned — polling station” — a comment seen by local residents. PEC this location explained the weather conditions — “rain”.

Where some polling stations opened actually in the field.

Some Russians vote with just stumps

Let us add that the first day of voting on amendments began with the fact that the site 2020og.ru electronic voting has stopped working. In Yekaterinburg today some PECs did not open at 8:00 for the beginning of voting. The incident in the voting process revealed by the journalist “Rain” Pavel Lobkov. He was able to vote on amendments to the Constitution twice. First pubic hair did it on his plot No. 141, and then remotely via the Internet.

The President signed adopted by the state Duma and Council of Federation the law on amendments to the Constitution several dozen amendments on 14 March. Two days later, the document was approved by the constitutional court. The next step is the all — Russian vote on the proposed amendments, which will take place on 1 July. This day announced the weekends, though ahead of time will be to vote on June 25.