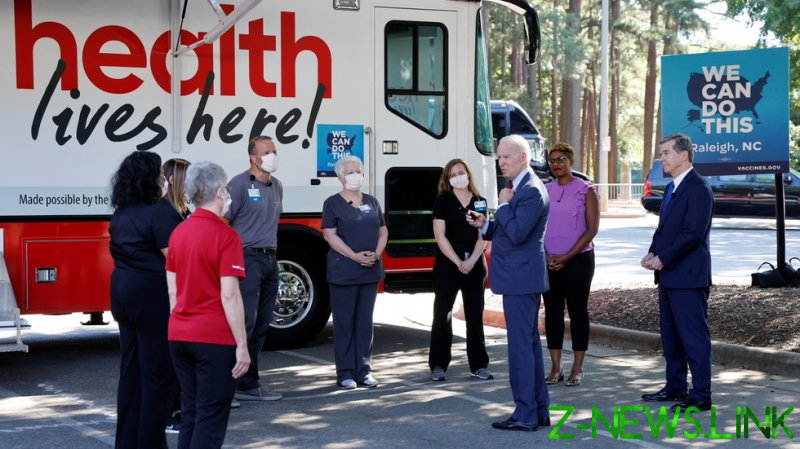 The program, called “Doses to Doors,” is designed to target ZIP codes with low vaccine uptake and “dispel rumors” about the Covid-19 jab that may be circulating in those communities.

The program launched officially on Monday at the South Side Homes apartment complex in Charlotte, North Carolina, where volunteers from the nonprofit group Action NC distributed flyers with information about the shot.

“We’re not confrontational, it’s not like you have to get the shot,” member Robert Dawkins told local outlet WBTV. “We get people that will say ‘Yes, I will get the shot,’ but the follow-up has always been the issue,” Dawkins said. “Will they go? How can we get people to go out and go? So now that the health department is out with us, we miss that middle step now.”

One man reportedly even “jumped at the chance” to get the one-off Johnson & Johnson shot right on his porch, according to WBTV. The man said that he was too busy taking care of his grandkids to go to the pharmacy, claiming he would tell his family members he had been vaccinated in the hope of convincing them to follow suit.

Local healthcare personnel are said to be especially concerned as the Delta variant of the virus, reportedly the most contagious yet, sweeps the country. There is no evidence the variant is deadlier than previous mutations, however.

Despite the program’s self-declared success, neighboring Republican South Carolina Governor Henry McMaster has urged his state health department to outright ban similar outreach efforts, noting that “enticing, coercing, intimidating, mandating, or pressuring anyone to take the vaccine is a bad policy which will deteriorate the public’s trust and confidence in the State’s vaccination efforts.”

Charlotte’s approach falls in line with the Biden administration’s avowed “door to door” tactics, which were recently floated by the president himself. Responding to McMaster’s criticism, White House Press Secretary Jen Psaki accused South Carolina of “literally killing people” with “the failure to provide accurate public health information,” including on the effectiveness of the Covid-19 shots and their accessibility.

Biden officials have pulled no punches for Republican opponents of the new vaccine campaign. On Thursday, White House Covid-19 coordinator Jeff Zients accused critics of trying “to mischaracterize this type of trusted-messenger work” and “doing a disservice to the country.”

Some have voiced a different set of concerns, warning that scammers might pose as health professionals and attempt to take advantage of locals, while others argued their taxes were being “wasted” on such a project.