USSR — the country of unwashed toilets 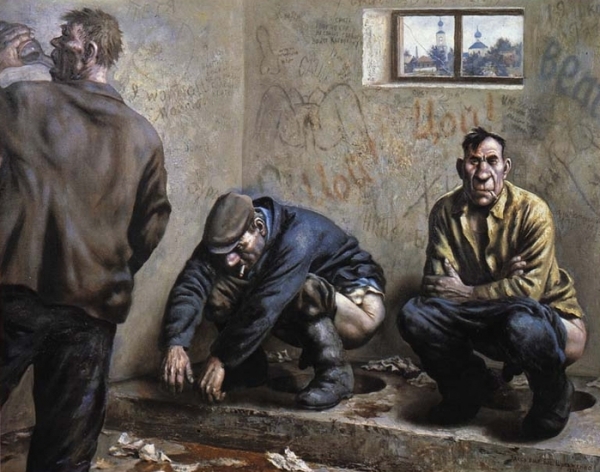 I have long wanted to write a post on the topic of public toilets in the USSR. It seems that the theme seems to be some minor but actually very important and tells a lot about Soviet life, if not everything. “But the USSR made rockets!” — from time to time cry fans of the USSR in the comments to my posts about Soviet life, and I’ll tell you this — don’t look at missiles, and public toilets — they are an indicator of real living standards in the country.

I will specify at once — with public toilets in the scoop it was not just bad but VERY bad. Actually — it was the most vivid indicator of the true attitude to people in the Soviet Union and the true position of this country in the world — with the exception of the military-industrial complex, the USSR was little different from the developing countries of the Third world, no matter how puffed up to show the opposite.

So in today’s post — a story about public toilets in the Soviet Union. In General, make sure you check out the article below, write in the comments your opinion, well to friends to add do not forget)

The toilets and the daily Soviet humiliation. 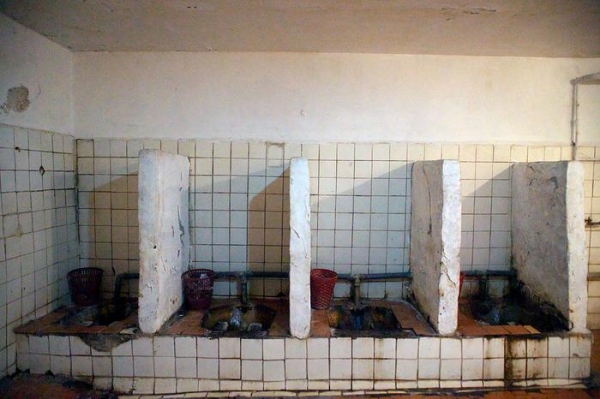 To begin with, that basically consists of public toilets in the Soviet Union. First- in the cities (even in the largest, like Moscow or Leningrad) public toilets was very small — often they were located in city centres and occupied a separate building, or separate a large room on the first floors of historic buildings. This alone was a great example of a Soviet life of the device — instead of having to make two dozen toilets easier, so to speak “for the people” — to build one grandiose toilet with marble finish a-La the mausoleum and a doorman at the entrance, and the queue peremetnulsya from one foot to the citizens at the doors of such places was almost the same as in the ziggurat with the carcass of the Leader. And Yes, the toilets (especially since the 1980s) have been paid — you are free in them no one would not be allowed.

The funny thing — despite all the external pomp of such institutions, and despite the fact that the toilets were paid, inside everything was organized very poorly — the walls of the booths most often did not reach the ceiling, and sometimes even had the front closing doors (no privacy) and toilets almost never have toilet paper (it would be immediately stolen), the water was exceptionally cold (there was even a special model of “toilet sink” with a black plastic valve), and the toilets were often of the so-called “Asian type” — a sort of hole in the floor. As the “mechanization of production” in the last years of the Soviet Union in such toilets could hang a few hand dryers “Vejelis” with a red button and a small mirror on the front panel. The dryer was extremely thin, and dry with their hands was very difficult.

See also:  It became known why Ukraine is again available the services of Yandex

That still remained to the citizens and guests of the city, in addition to such paid toilets-mausoleums? The toilets were in cafes and restaurants — but first, in the Soviet Union these institutions were few in principle, and secondly, just to go back to the toilet you could not to let. It is now there is a law that toilet of any cafe can go to the man in the street — a scoop you could just expel from the institution, shouting “look, what wanted!”.

Besides the café, there were still various courtyards, gateways and porches, and bushes — as told by the hero of Vladimir Kashpur in the film “About businessman fomu” — “Motherland gave the right to everyone is completely free to shit under every Bush”. A puddle of urine was in the Soviet entrances phenomenon is far from uncommon — and the saddest thing was on such crimes are often not the misfits and drunks, and ordinary citizens who have simply had no other exit.

Actually — that such humiliation and had to endure the ordinary Soviet citizens. Typical Soviet life consisted not of missiles and ballet, but from the small daily humiliations — in line, at work, in transport, in the clinic, at school, in a public toilet and so on.

In a country of unwashed toilets. 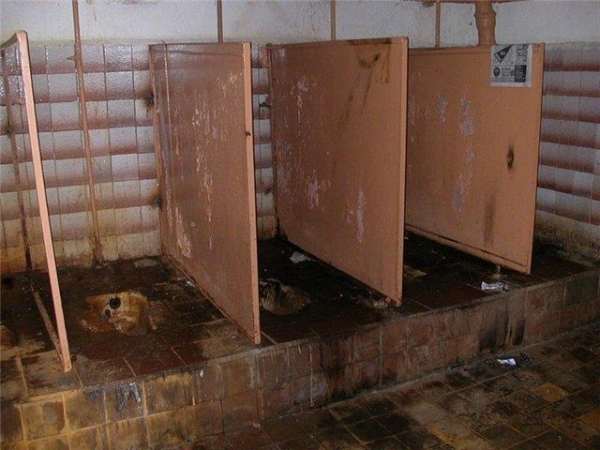 Here we come to another very interesting point, about which it is impossible not to write — apart from the fact that the public toilets with the Soviet Union was not enough and there need to buy tickets in the cinema itself, the sanitary condition of the toilets to put it mildly left much to be desired. And this is another very clear example of the real situation in the Soviet Union — you stand in line, pay money and still get something shoddy. There is no alternative, there is no competition, there is nobody to complain — and it was generally arranged scoop.

Throw some texture — exactly how it looked. In more-less decent condition contained pay toilets in city centres — those “mausoleums”. Although there is almost always the sanitary condition is poor, the plumbing was dirty and with a red stripe on the location of the drain water, and toilets were often the very Asian style in the form of a hole in the floor that I had to sit down “the eagle” — “and I’m sitting on the edge of the toilet like a mountain eagle on the top of Caucasus.”

See also:  Residents of Transcarpathia warned of the dangerous rise of the water level in the rivers

In a much worse condition was a normal train station toilets — especially those that were free. They are, sorry for the details, was crappy in the literal sense of the word, instead of the toilets (even prosteishih “eagle”) was often the usual holes in the concrete floor slab, often without walls between them, and as a “urinal” on the opposite wall was just a narrow (width and depth about 15 cm) the drain trough. Smelled these in the station toilets so that the air could hang an axe, and to clean up these Augean stables, it was possible only through a powerful fire hose to extinguish fires in high-rise buildings. 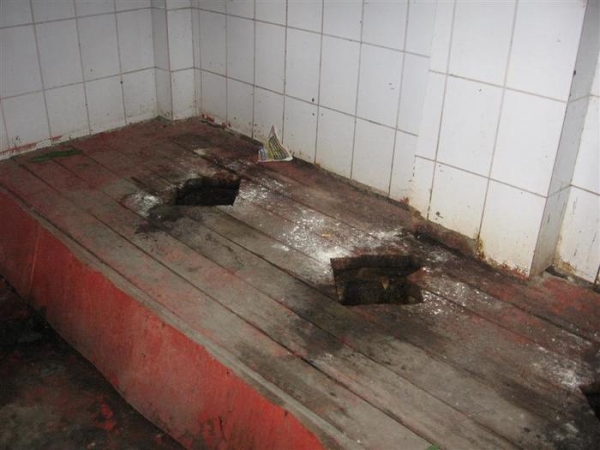 What’s interesting — almost all the “public” toilets (not only station and “mausoleums”) was almost always in poor condition. Remember public toilets in all Soviet scientific research Institute — they almost always were, too, either “eagle” or simply with bad toilets with no toilet seats, if there were four booths in one necessarily constantly flowing water, another flush was not working, the third one on the door didn’t latch (she had to keep a scarf), and the fourth was occupied by the lady, turning her into the closet for homespun rags, tin cans (with crooked words “inv-08-64” with red paint) and wooden mops. From time to time the cleaning lady most unceremoniously suddenly broke into the men’s room and with a terrible roar surdila in the pantry. And cleanliness of such toilets (even in large research institutes) left much to be desired. 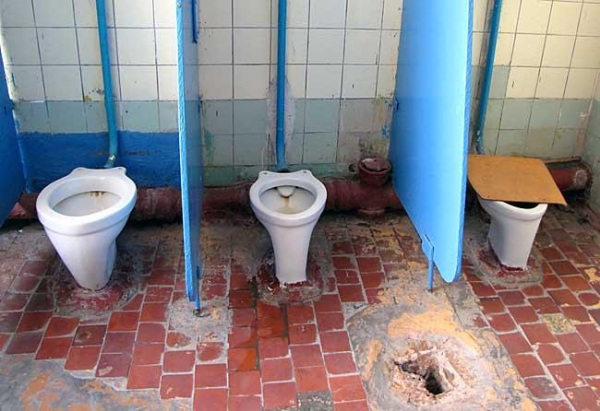 In General, as I wrote above — all it was a great indicator of how generally worked the Soviet system. In words, everything was done “for the people” — but in fact it was like this.

Gagarin and toilet paper. Instead of an epilogue.

In this post I have to mention about the fact that I was once struck in the USSR sent a man into space in 1961, and the toilet paper began to produce only 7 years later, in 1968, and then in the English equipment (its not there). Somehow this fact is very annoying phantom of the USSR, and the mere mention of this, they break out these reviews:

Don’t know how you think — and in my opinion, the true achievements of the country demonstrates not missiles (which are irrelevant to life 99.99% of the population), and simple human things like the status of public toilets, and normal public transport that people face every day. And according to this indicator, the Soviet Union was most of this developing Third world country — it would not have tried to prove the opposite…

Do you remember the Soviet toilets? Still have any experience? What do you think on this subject?