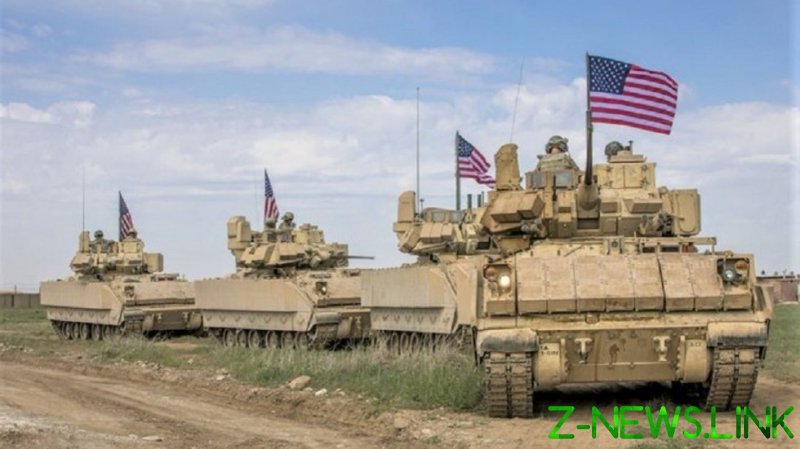 There are an estimated 900 or more US troops currently in Syria – both in the southern enclave of At Tanf and in the northeast, where they are “securing” the oil wells and helping the Syrian Democratic Forces operate a de facto independent government. Their presence violates international law and the government in Damascus is opposed to it, but Washington insists they are there to fight Islamic State (IS, formerly ISIS) as part of an international coalition.

The US is committed to keeping a “limited military presence” in northeast Syria “for the sole purpose” of defeating IS, “in partnership with the SDF, and to stabilize areas liberated” by that group, acting Assistant Secretary of State for Near Eastern Affairs Joey Hood said Friday in a teleconference.

His remarks were in line with a statement the US-led coalition CJTFOIR issued on Thursday, saying the patrols in northeastern Syria were “to ensure [IS] never resurges and deter any potential aggression,” efforts “essential to the stability & security of the region.”

References to IS might come as a mystery to people who believed the self-proclaimed ‘caliphate’ had been defeated by March 2019, when the SDF captured Baghouz, a village on the Syrian-Iraqi border that was the last settlement the group claimed to control. Or in October that year, when its leader Abu Bakr al-Baghdadi was killed in a US raid in Syria’s Idlib province, nominally controlled by “moderate” rebels backed by Turkey.

The group “remains a determined enemy” and “there is still much work to be done in Iraq and Syria,” according to Patrick Worman, acting director of the Office of the Global Coalition to Defeat ISIS, who was also on the call.

Hood also brought up the issue of humanitarian aid, saying that the US supported all forms of assistance to the people of Syria, “including cross-line assistance from Damascus,” but that it “alone cannot meet the current needs” in Idlib and the northeast. He did not mention that the reason for this might be the crippling blockade placed on the Syrian government by the US and its allies, under the so-called Caesar Syria Civilian Protection Act.

US calls for cross-border assistance instead are part of the ongoing debate in the UN Security Council over extending the authorization for one or more such crossings between Turkey and Idlib to continue operating for another year. Critics of the government in Ankara have alleged that the route has been used to smuggle weapons to terrorists.

The US and its allies refuse to recognize the legitimacy of the Syrian government, denouncing last month’s presidential elections in advance as “neither free nor fair.” President Bashar Assad was re-elected in a landslide.

On Friday’s call, Hood repeated the US position that “stability in Syria and the greater region can only be achieved through a political process that represents the will of all Syrians.” This presumably refers to both the Turkish-backed “moderate rebels” in Idlib – which include Al-Qaeda affiliates – and the US-backed SDF in northeast Syria.