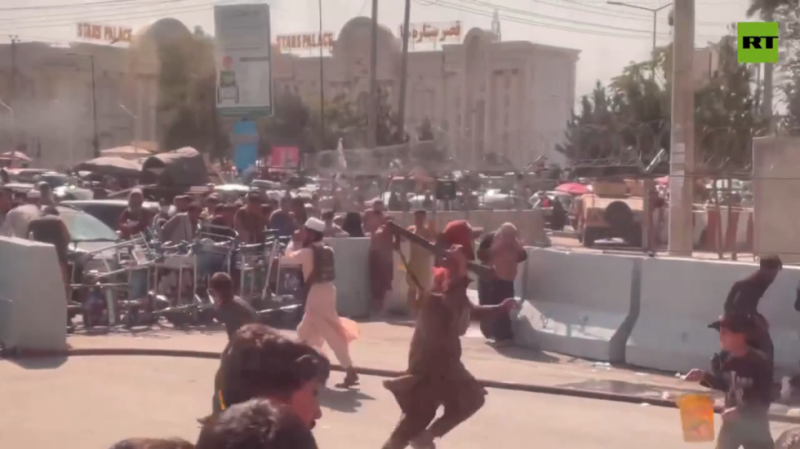 American troops call what is happening here ‘World War Z,’ referring to the zombie movie starring Brad Pitt. It is clear why.

The situation is horrendous.

The entire airport is littered with bullet casings and flash-bang grenades. Everything, absolutely everything is covered in barbed wire. The entire runway is lined with barbed wire.

Shooting is ceaseless, 10 minutes don’t pass without gunfire. Either within the airport; American troops scaring away the more daring locals, or shooting near the main entrance, where the Taliban is discouraging would-be refugees.

Clothes are everywhere. The odd sandal, torn woman’s shoe, shirts and headscarves. The walls of barbed wire are at times reminiscent of Christmas trees – strung with clothes and litter. A reminder of the mobs and the crush from the early days of the evacuation.

As I write this, something is burning at the northern end of the airport – there’s a column of smoke rising near parked American cargo planes. What exactly, we can’t tell.

About 20 meters from us, platoons of American and Italian troops appear to be taking a break – lounging on office chairs they dragged out of the wrecked airport terminal. Lounging under the very airgate that Afghan civilians infamously swarmed over, as if zombies, in bid to escape.

About the Afghans, who we saw during landing. They are now being lined up in square-shaped formations (those who have been approved for evac) – and are made to sit under the warm Afghan summer sky for hours and hours. Women, kids… all, according to American press.

Unfortunately, we can’t post pictures or videos right now, it would violate the evac agreement between Russia and the US. [Images used in this article were shot by an RT crew outside the airport.] American troops here are on edge, nerves are wound tight. Every single one of their flights is taking off under the guns of Taliban fighters. You can understand why they don’t want to provide the Taliban with a detailed schematic of where everyone is stationed inside.

That the Russian Foreign Ministry even managed to clinch an agreement with the US to let Russian evac planes in, at such a hectic time, is nothing short of a diplomatic miracle.

We simply can’t risk jeopardizing that agreement, and the safety of this and future evacuations, just to show you photos which you’ll forget you ever saw within a week.