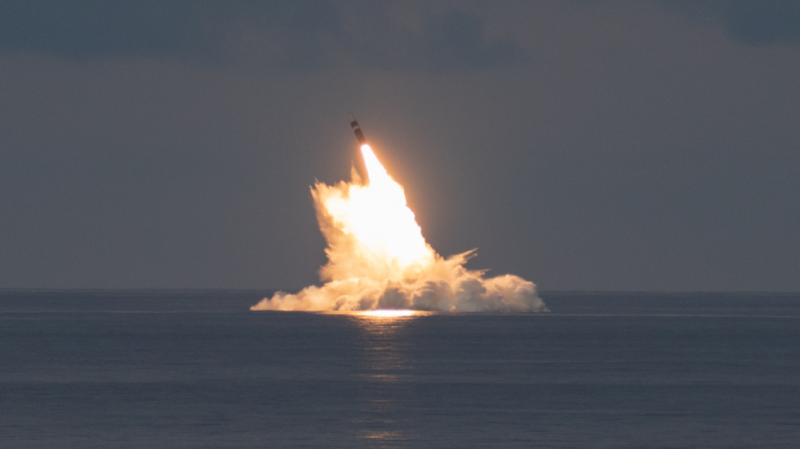 The launch was conducted off the coast of Cape Canaveral, Florida on September 17 from USS Wyoming, an Ohio-class nuclear-powered ballistic missile submarine which has been in commission since 1996, and recently underwent an technological overhaul and refueling. The D5LE is the latest ‘life-extended’ version of the Trident II missile expected to remain in service until 2042.

It was part of the so-called Demonstration and Shakedown Operation, designed to show to Americans, allies and rivals alike the “unmatched reliability of our sea-based nuclear deterrent,” according to Vice Adm. Johnny R. Wolfe.

“The life-extended missiles – Trident II (D5LE) – are now being deployed to the Fleet and will serve for the remaining service life of US Ohio-class and United Kingdom Vanguard-class SSBNs,” the Navy said in a press release.

The US and UK share the Trident tech, and both have recently pledged to help Australia obtain technology to build a nuclear-powered submarine fleet. While it remains to be seen what type of vessels Canberra will eventually get, all parties have insisted that they won’t be armed with nukes.

The so-called AUKUS deal caused an unprecedented diplomatic row and heated tensions with NATO ally France, which as a result lost a lucrative shipbuilding contract with Australia.

The move has also triggered a strong backlash from Beijing, as most observers agree the controversial pact is aimed at countering and containing China. The past week was tense with South Korea also testing its own submarine-launched missile, while the North separately launched a railway-borne missile system, and a long-range cruise missile.

Perhaps wary of the timing, the US Navy specifically emphasized that its missile test was scheduled “years in advance” and “not conducted in response to any ongoing world events, nor as a demonstration of power.”