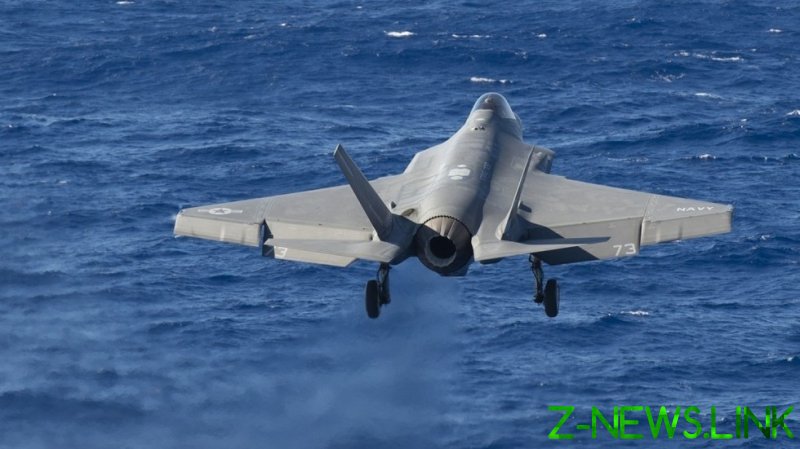 The US Navy is working to recover a plane that fell into the South China Sea – which is claimed by China almost in its entirety – during a war drill this week that left several sailors injured.

Three Navy personnel were transported to the Philippines for medical treatment, while another four were treated at sea on Monday after a US F-35C Lightning II stealth plane suffered a “landing mishap on deck while USS Carl Vinson (CVN 70) was conducting routine flight operations in the South China Sea.”

While the pilot of the plane was soon rescued by a military helicopter after ejecting, the aircraft itself has not been recovered yet.

“I can confirm the aircraft impacted the flight deck during landing and subsequently fell to the water,” said US Navy spokesperson Lieutenant Nicholas Lingo on Tuesday.

Asked about the possibility of China salvaging the aircraft Lingo said, “We cannot speculate on what the PRC’s intentions are on this matter.”

The US Navy has launched an investigation into what went wrong with the aircraft during the crash landing.

At the time of the accident, Navy supercarriers USS Carl Vinson and USS Abraham Lincoln, among other US ships and aircraft, were engaged in a military exercise near China as tensions between the two countries continue to escalate.

Rear Admiral Dan Martin boasted in a statement that the drill “highlights the U.S. Navy’s ability to deliver overwhelming maritime force, when called upon, to support a free and open Indo-Pacific region.”

China has territorial claims to almost all of the South China Sea and has denounced US operations in the area as an infringement of its sovereignty.