Home / WORLD / US drivers in traffic collapse after major storm

US drivers in traffic collapse after major storm 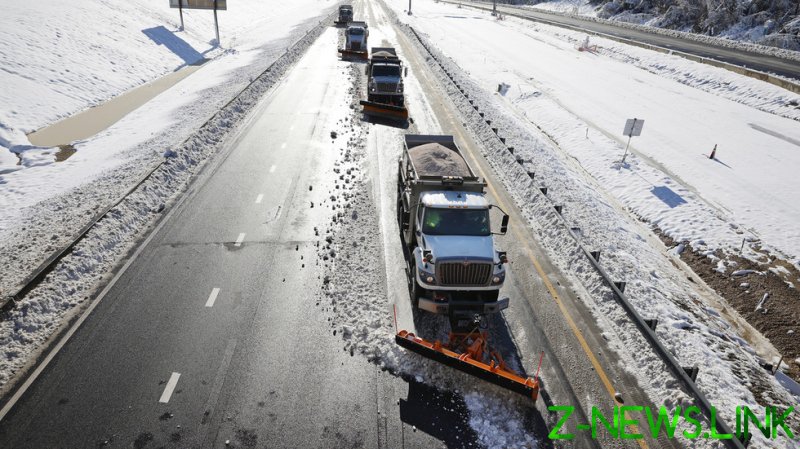 Federal authorities have stepped in after snowfall caused congestion on the roads and drivers to eventually be stranded for nearly 24 hours on a highway.

The US Department of Transportation announced in a Tuesday afternoon tweet that the Federal Highway Commission is in contact with Virginia transportation officials, following massive outrage from drivers stranded on the road, including Senator Tim Kaine (D-Virginia) who tweeted that he had been stuck in traffic on Interstate 95 for 19 hours on his way to the Capitol. According to Hillary Clinton’s 2016 vice presidential candidate, it is normally a two hour commute for him.

Delays were the least of some people’s worries as the storm and poor road conditions caused more than 860 crashes, including multiple jack-knifed semi trucks, and over 840 disabled vehicles, Virginia State Police announced. There have been no reported fatalities, but numerous minor injuries. A mix of rain and snow created dangerous conditions overnight and, in turn, massive traffic delays as sections of highway needed to be closed. Police have urged Virgnians to avoid driving unless absolutely necessary.

“The drive is not worth the risk of a crash, getting stuck, injury to you or your passenger or the cost of a repair,” police said in a statement.

Numerous drivers have taken to social media to post images of the massive traffic jams and to vent their frustrations at state officials and the transportation department, with some claiming to have been stuck on the roads for numerous hours, some reporting more than 20.

Many drivers were stalled in place overnight on major roadways during the first snow of the season for the area and freezing temperatures.

Other videos showed people sharing food with one another and finding other ways to pass the hours of idle time stuck on the roads.