Home / WORLD / US airlifts Americans from 200m beyond Kabul airport perimeter, after US general allegedly ‘embarrassed’ by British rescue ops

US airlifts Americans from 200m beyond Kabul airport perimeter, after US general allegedly ‘embarrassed’ by British rescue ops 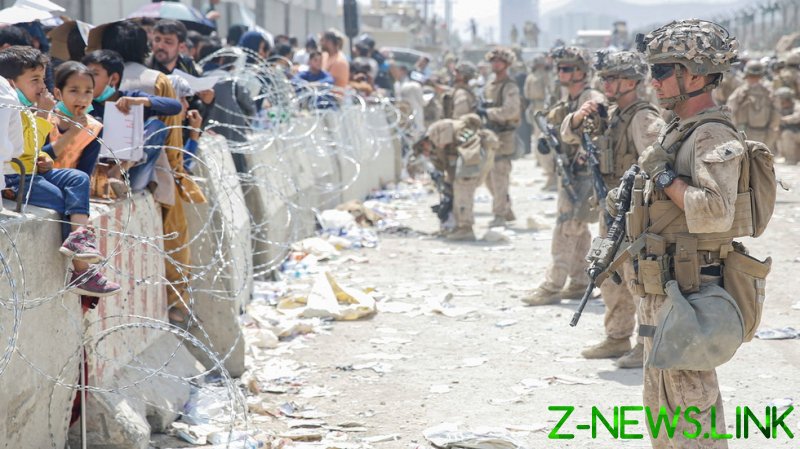 Major General Christopher Donahue has asked the commander of the 22nd Special Air Service (SAS) Regiment of the British Army to stop their operations beyond the perimeter of the Hamid Karzai International Airport (HKIA), because they were “embarrassing the United States military in the absence of similar US military operations,” Washington Examiner columnist Tom Rogan claimed on Friday.

“I understand that the British officer firmly rejected the request,” Rogan added.

Elements of the 82nd Airborne are part of the 6,000-strong US force deployed at HKIA, which also includes parts of the 10th Mountain Division and the 24th Marine Expeditionary Unit. They were sent in to secure the airport after the surprise Taliban takeover and chaotic scenes of desperate Afghans clinging onto US troop transports last Sunday.

Only a “small number” of US troops went outside the HKIA perimeter for a “short amount of time” on Friday, in order to bring in 169 people that were unable to get in through the gates, Pentagon spokesman John Kirby said on Friday, referring to a group President Joe Biden described at an earlier press conference as American citizens.

Around the same time Rogan posted his claim, AP had reported that several CH-47 Chinook helicopters operated by the 82nd “flew into Taliban-held Kabul” to “scoop up would-be evacuees,” whom the agency described as “Afghans, mostly women and children.” AP attributed this to US officials who requested anonymity.

Kirby initially said he could not confirm this. Later in the day, however, he said that the three Chinooks actually took part in the evacuation of the 169 Americans – not Afghans – stuck at a hotel about 200 meters away from the airport and unable to get in using the roads.

AP also claimed that CIA and DIA officers and special operations forces on the ground in Afghanistan were gathering US citizens and Afghans who worked for the US military at predetermined pick-up sites outside Kabul, to fly them into the airport. That claim was impossible to verify.

According to media reports, both British and French commandos have ventured into Kabul to ferry groups of their nationals from the city to the airport, while no such effort has been undertaken by the US troops.

Rogan blamed the situation on a “bureaucratic tug of war between the State Department, Pentagon, and White House,” and said that relations with the British, French and other allied governments in Kabul were made worse by US failure “to communicate adequately, or in some cases, to communicate at all, on their intentions and actions.” However, they all admit that only the US military could provide the airfield defense and air traffic control currently at HKIA.

Defense Secretary Lloyd Austin and Chairman of the Joint Chiefs of Staff Mark Milley have repeatedly said the US military does not have the capability to extend the security perimeter into Kabul. Biden argued that it wasn’t necessary, since the Taliban are letting Americans with the proper papers through their checkpoints anyway. However, Austin and Milley told members of Congress later in the day that some Americans were physically abused by the Taliban at a checkpoint.

“I hope this isn’t true,” Fox News senior political analyst Brit Hume tweeted in response to Rogan’s claim. “One part of it is true, though. What the British are doing to get their people out certainly is making the US look bad.”

Rogan gained notoriety in May 2018, when he urged Kiev to bomb the newly opened bridge connecting mainland Russia with the Crimean peninsula, describing it as an “outrageous affront to Ukraine’s very credibility as a nation.” He later claimed to have received support from Ukrainian Foreign Minister Pavlo Klimkin, who promised to protect him from ending up in a Russian maximum-security prison. Klimkin said he never spoke to the man, however, and the call turned out to be the work of the notorious Russian pranksters Vovan and Lexus.