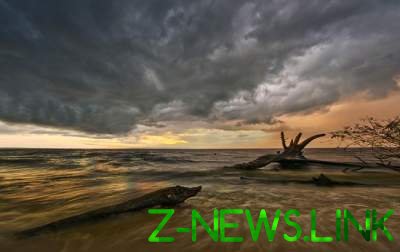 Vyshgorod police Department urges citizens to be careful near the Kiev reservoir. At the bottom found two bombs during the Second world war. It is reported Vyshgorod police division on his page in Facebook.

The police asks to be careful not to take risks for the sake of fishing or exploring on the water. Since transport to the landfill is impossible to defuse the bomb will be in place. In addition, there is no information on how much ammunition can is discovered nearby with bombs.

In the detonation radius can increase significantly. “We ask citizens to be careful! In the waters of the Kiev reservoir, near the village Rovzhi, discovered two bombs SC-250 from the Second world war. According to the decision of an emergency meeting of the district Commission of TEB CHS under the chairmanship of Vyacheslav Savenko and with the participation of representatives of Vyshgorod police division, DHHS, conservation patrol Kiev on 29-30 October in 2017. approved a plan for disposal of munitions.

See also:  Terrible accident in Lviv region: auto soft-boiled, there is a victim.

Since the survey found that their condition does not allow transport to the landfill, so explosive service will carry out the clearance of bombs on a place of detection. The time of work will depend on weather conditions!

Dear citizens! Please note that there is a threat of a near revealed bombs and an unknown quantity of ammunition, and their subsequent detonation, so the affected area can have a much larger radius. We ask you to report the incident to relatives and friends that may have planned to stay in the danger zone! Encourage fishermen to leave the perimeter of the waters of the Kiev sea, which will be defusing bombs! Be careful!”, – written report Vyshgorod police Department.

See also:  "Cattle in the subway": the social network was much discussion of controversial case 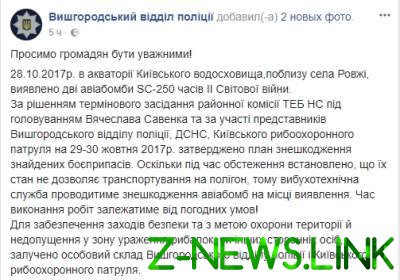