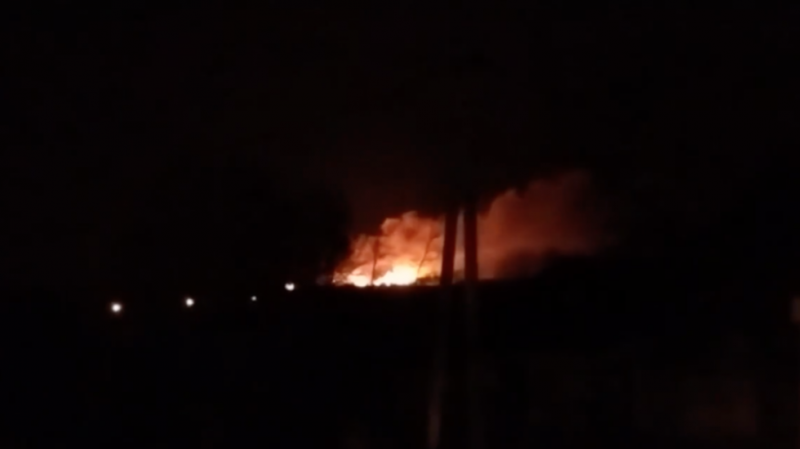 Explosions that lit up the sky south of the Russian city of Belgorod on Tuesday evening were caused by a Ukrainian ballistic missile striking an ammunition depot, Ukrainian sources claimed. While there are no reports of civilian casualties, four Russian soldiers may have been injured in the strike.

Video of the explosion, followed by secondary blasts, started making rounds online late on Tuesday local time. Initial reports speculated someone at the depot mishandled munitions, but Ukrainian media soon claimed that the 19th Missile Brigade of their military had fired a Tochka-U tactical ballistic missile at the warehouse.

Regional head Vyacheslav Gladkov told Russian media that the explosion happened in the hamlet of Red October, about halfway between Belgorod and the Ukrainian border.

“There are no casualties among the residents, and no damage to the hamlet. Emergency services are on the scene. We’ll know the cause of the events later,” Gladkov said in a statement. Secondary explosions reportedly stopped after about half an hour.

Four servicemen were injured when “a projectile hit” a military installation in the Belgorod region, according to the news agency TASS.

The strike comes after Russia announced it would “drastically reduce” its military activity in northern Ukraine, on the approaches to Kiev and Chernigov, as a sign of good faith for peace talks with Kiev. Delegations from both sides met in Istanbul, Turkey earlier on Tuesday and set out their parameters for negotiations.

Meanwhile, Russian Defense Minister Sergey Shoigu told reporters that the primary objective of the military operation had been achieved and that it would now focus on the “liberation of Donbass,” referring to the two breakaway regions that Moscow has recognized as independent states.

Moscow sent troops into Ukraine in late February, following a seven-year standoff over Kiev’s failure to implement the terms of the Minsk agreements and end the conflict with the breakaway regions of Donetsk and Lugansk.