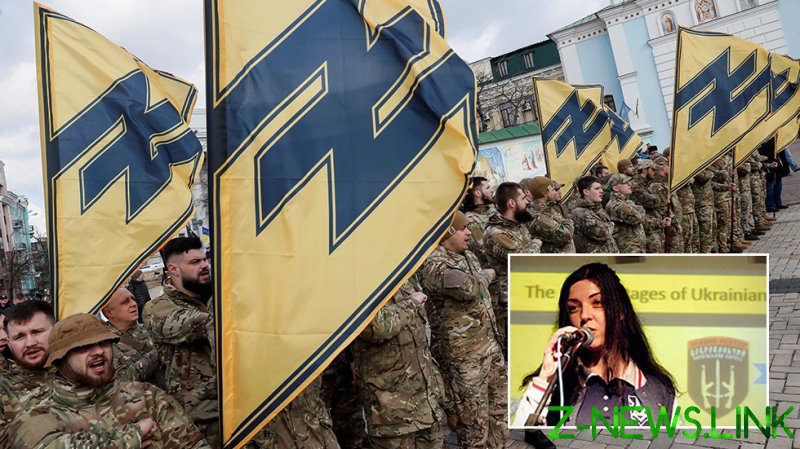 Olena Semenyaka, who has been called “The First Lady of Ukrainian Nationalism,” was due to take up a Junior Visiting Fellowship at the Vienna-based Institute for Human Sciences (IWM) in January.

However, on Monday, the college told RT that the arrangement was now under review in response to allegations raised online. “The jury of the Ukraine in European Dialogue fellowship program has been requested by the IWM Collegium to reconsider the award of a fellowship to Olena Semenyaka,” a spokesperson said. “We take the information recently brought to our attention very seriously and will issue an official statement tomorrow.”

In the meantime, a profile of Semenyaka on the institute’s website, expressing her interest in dialectics and Ukrainian politics, was deleted.

Since then, the IWM has published a formal statement online in which its leadership “condemns and distances itself clearly from the extreme right-wing statements and actions of Olena Semenyaka.” It added that the institute will “make every effort to check why its political activity in relevant far-right circles has escaped the attention of the jury responsible for the selection. The institute deeply regrets this and has withdrawn Semenyaka’s Fellowship with immediate effect since the facts have become known.”

The 34-year-old activist rose to prominence around the time of Ukraine’s 2014 Maidan and has been closely associated with the far-right Azov movement. Both the US and Russia find rare common ground regarding the group, which is banned by Moscow and barred from receiving support by the US Congress. American Democrats have even pushed for members of the associated paramilitary Azov Battalion to be prosecuted as terrorists. Semenyaka has been listed as the group’s “co-ordinator of international relations.”

Semenyaka is also listed as a Member of the Supreme Council of the National Corps of Ukraine, another organization described as an extremist outfit by a number of countries. In 2018, the US State Department listed it as a “nationalist hate group,” documenting reports that it had carried out illegal kidnappings and an attack on a Romani camp in the capital, Kiev.

Ivan Katchanovski, a political scientist at the University of Ottawa in Canada, summed up the activist’s involvement with a string of ultranationalist iniatives and brought her “Orwellian” fellowship to light on Twitter. He also reposted a widely shared picture purporting to show Semenyaka performing a Nazi salute while holding a swastika banner. It is unclear when the photograph might have been taken. Given her prominence, and the fact that she has been a focus of research herself in Slavic studies spheres, it is unclear why her fellowship was not subject to more scrutiny in the first place.

According to a research paper by Adrien Nonjon of George Washington University, published late last year, Semenyaka has kept her academic career on the back burner while playing a central role in the ultranationalist movement. According to Nonjon, she began a PhD at the National University of Kyiv-Mohyla Academic in 2010, but took time out to participate in the unrest surrounding the Maidan. Her political theory, sitting somewhere between conservative traditionalism and ultranationalism, is said to have gained significant traction within far-right circles in Ukraine.

The IWM is a political studies and sociology institute founded in 1982 by Polish political philosopher Krzysztof Michalski. Among its fellows are Canadian philosopher Charles Taylor, and Timothy Snyder, professor of History at Yale University. Snyder is a controversial figure given his perceived advocacy for American liberal democracy in Central and Eastern Europe, and has been a critical chronicler of Ukrainian nationalist movements.

In his book, ‘The Reconstruction of Nations’, the American historian describes how two Ukrainian groups, the Ukranian Insurgent Army (UPA) and the Organization of Ukranian Nationalists (OUN)-Bandera, their ranks bolstered by defections from the Nazi-raised local levies of the SS Galicia, torched churches with entire congregations still inside during WWII. According to Snyder, “they displayed beheaded, crucified, dismembered, or disemboweled bodies, to encourage remaining Poles to flee.”

In December, an RT investigation revealed how successors to those partisan militias receive funds from the Ukrainian government to train and indoctrinate the country’s young people. One initiative, a three-day war-game in which participants fight hand-to-hand and light flares, is touted by organizers as building “readiness to defend the Motherland, by mastering the spiritual heritage of the UPA’s liberation struggle.”