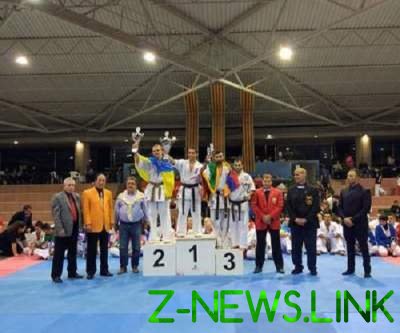 Ukrainian team was represented by seven athletes, led by Sheehan, Sergey Lukyanchikov, President of the Ukrainian karate Kyokushinkaikan Association and coach of the national team.

The preparation of the national team for the European Championships began with the traditional summer training camp “Dakhnovka Sich”, which was attended by the representatives of Chile, South Africa, Belarus, Israel. The camp programme was quite intensive and included various sections of fighting techniques. In the second half of September was a week-long preparatory training camp at the Kumite, a week before the Championship Spain team held a seminar on Kumite, which took part themselves “collectors” and other athletes Association to assist in the preparation for the European competition.

Finals in two weight categories were ours. The winner in weight category to 80 kg has become Sergey Doronin, the second place Maxim Maximov. In the category up to 70 kg of “gold” in Anatolia Tomarova, “silver” – Denis Maksimov.

“I congratulate the guys with the participation and victory in the championship of this level, there is still a lot of challenges, and I am sure a lot of victories. I want to thank you for funding and assistance in organizing the trip’s exclusive sponsor, national Internet portal “UKRNET” – said the President of Ukrainian karate Association Kyokushinkaikan, Sergey Lukyanchikov.

We will remind that on may 21, Ukrainian athletes won two “gold”, “silver” and “bronze” in the First Asian Championship Karate Kyokushinkaikan