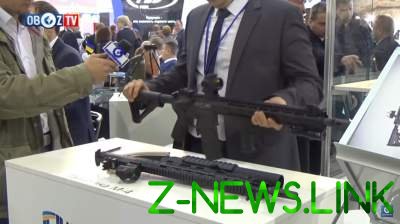 New, upgraded rifle NATO, was shown at the exhibition in Kiev.

Ukrainian military engineers showed a modernized version of an American assault rifle that can use cartridges of two different calibers – the NATO and the national sample.

The rifle can be seen at the international specialized exhibition “Arms and security” held in Kiev, – said in the story “Oboz.TV”.

“This is the AK-47 is a modernized version of the American M16 assault rifle. Its peculiarity is that it can be converted into a caliber NATO and national sample. NATO cartridge – 5,56х45, domestic – 7. 62×39”, – said the representative of the developers.

He added that the process of conversion of the rifle is “a few tens of seconds” – and then demonstrated it.

According to him, this feature will come in handy during the participation of Ukrainian military in joint exercises with NATO forces.

The exhibition also presents self-propelled howitzer Krab production of Poland, about which he wrote the “observer”, the Ukrainian machine gun KT-7.62 mm, surpassing the characteristics of the Kalashnikov machine gun, the first mobile protivomoroznyh complex, is able to effectively neutralize attacks a group of commercial unmanned aerial vehicles, upgraded antiaircraft self-propelled installation ZSU-23-4M, which is equipped with missiles, unmanned aerial vehicle stealth, which practically is not fixed radars, missiles “air-air” and new engines for combat helicopters produced by the Ukrainian company “Motor Sich”.