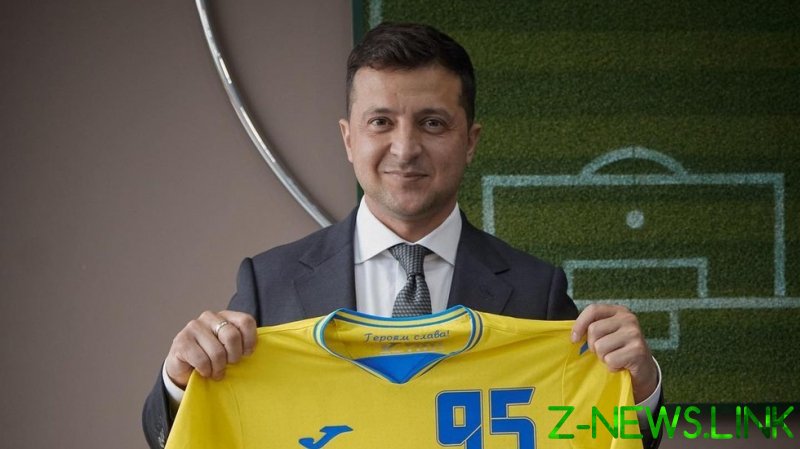 On Monday, the Ukrainian Football Association upset Jewish groups and sparked outrage in Russia when it released the latest design of the country’s kit, designed by Spanish sports clothing manufacturer Joma. The yellow and blue shirt raised hackles due to its use of a fascist rallying cry.

It was branded with the words, “Slava Ukraini, Heroiam slava,” which translates to English as ‘Glory to Ukraine, Glory to heroes.’

Now, according to news agency RIA Novosti, following an appeal from the Russian Football Union, European football governing body UEFA has demanded that one of the phrases – ‘glory to heroes’ – be removed from the shirt, as, when put together, the two phrases are considered political.

‘Glory to Ukraine’ by itself was determined to be generic and of general national significance. However, “This specific combination of the two slogans is deemed to be clearly political in nature, having historic and militaristic significance,” UEFA told RT.

The phrases have a long history in Ukraine, dating back to the 1800s. But in the two centuries since then, they have gained nationalistic connotations. Both phrases were used by members of the Organization of Ukrainian Nationalists (OUN) and the Ukrainian Insurgent Army (UPA), groups that fought alongside the Nazis in World War II and played not insignificant roles in the Holocaust.

Since the 2014 Maidan, far-right groups in Ukraine have rehabilitated the terms, and they have since become a rallying cry for nationalists. Famously, in September 2014, the then-Ukrainian president, Petro Poroshenko, concluded a speech to US Congress with the phrase “Glory to Ukraine.” Four years later, in 2018, Poroshenko announced it would be the official greeting of the Armed Forces of Ukraine, replacing the formerly used ‘Hello Comrades’.

The latest incident isn’t the first time the slogan has appeared in the world of soccer. In 2018, Croatian defender Domagoj Vida was forced to apologize after shouting “Glory to Ukraine” following the country’s quarter-final victory over Russia in Sochi during the World Cup.

Russian Foreign Ministry spokeswoman Maria Zakharova praised UEFA’s decision, saying that “sport is not a battlefield, but a field of competition,” and one’s motherland should be glorified with sporting achievement, not nationalistic slogans.