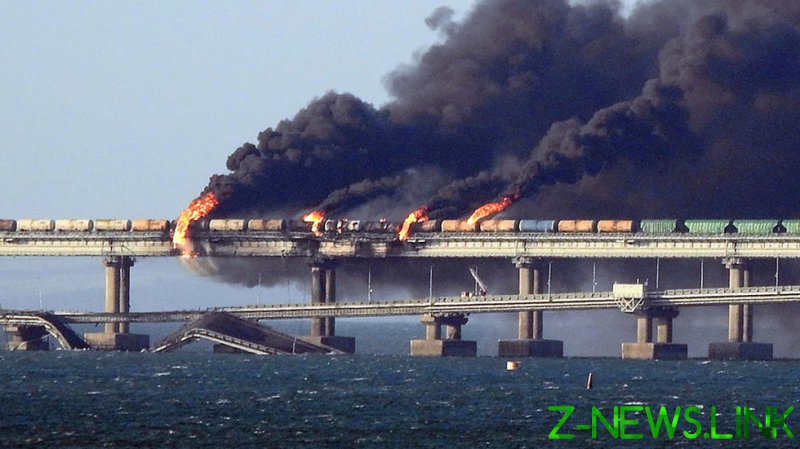 The secret plot was drawn up at the request of senior British Army intelligence operative Chris Donnelly, the Grayzone reported on Tuesday, citing internal documents and correspondence that the investigative journalism outlet obtained from an unidentified source. The stated goal was to destroy the bridge to cut off a key Russian supply route, isolate military forces in Crimea and temporarily block maritime access to the Sea of Azov.

The attack roadmap was titled, ‘Audacious: Support for Ukraine Maritime Raiding Operations’, and it was produced by UK military veteran Hugh Ward, according to the documents obtained by Grayzone. Donnelly, who’s also a veteran NATO advisor, called the plans “very impressive indeed.”

Ward laid out multiple options for blowing up the $4 billion bridge, including a cruise missile attack targeting concrete pillars on each side of the central steel arch. He also examined using divers or underwater drones to attach limpet mines to pillars at the “weakest part” of the structure.

Although last week’s attack on the bridge was carried out using a truck bomb, rather than the options discussed in the UK analysis, there are indications that British spies had shared their findings with Ukraine’s government “at the highest levels,” Grayzone said. The outlet obtained an email in which Donnelly forwarded the plans to Lithuanian Defense Minister Audrius Butkevicius.

Reached by phone, Ward didn’t deny that he prepared the attack plans for Donnelly, Grayzone said. “I’m going to have a chat with Chris and confirm with him what he’s prepared for me to release,” Ward told the outlet.

Although the Crimean Bridge is crossed by thousands of civilians daily, the UK study included no reference to avoiding non-combatant casualties. Saturday’s bombing, as it turned out, killed at least four civilians. Russian President Vladimir Putin called the blast a terrorist attack and indicated that Monday’s air strikes against infrastructure targets in Kiev and other Ukrainian cities were carried out in response to the bridge incident.

Ukrainian media outlets reported that the attack was perpetrated by the Security Service of Ukraine (SBU). Senior officials in Ukraine’s government celebrated the bombing and made jokes about it. The SBU posted a photo of the damaged bridge with a note saying, “The sun is rising, the bridge is burning beautifully.” Senior presidential aide Mikhail Podoliak posted a Twitter message calling the blast “just the beginning.”