Home / WORLD / Tucker strikes back: Fox host accuses Pentagon of ‘declaring WAR’ on his show after DOD attacks his comments on pregnant soldiers

Tucker strikes back: Fox host accuses Pentagon of ‘declaring WAR’ on his show after DOD attacks his comments on pregnant soldiers 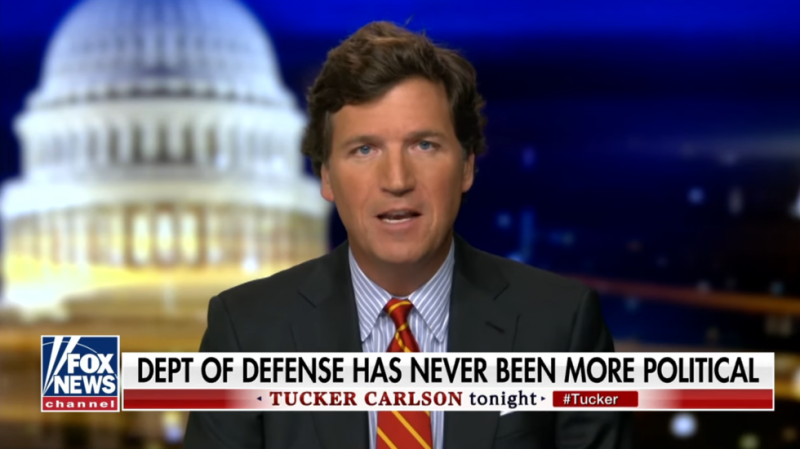 “Since when does the Pentagon declare war on a domestic news operation? I can’t remember that ever happening,” Carlson said on a segment of his show on Thursday night, adding “This is genuinely worrisome. The Department of Defense has never been more aggressively or openly political.”

The TV pundit responded after the Pentagon issued several different statements addressing a segment of his show the night prior. While sabre rattling against Beijing, Carlson pointed to the military’s new “maternity flight suits,” under development since the Pentagon altered its rules to allow pregnant women to fly non-combat craft into their second trimester.

“It’s a mockery of the US military,” he said, arguing that the shift toward more “feminine” armed forces would spell trouble as the US moves to confront a “masculine” China.

Pentagon spokesman John Kirby weighed in on Carlson’s comments on Thursday, saying “What we absolutely won’t do is take personnel advice from a talk show host or the Chinese military” while lauding the “diversity” of the US armed forces. Separately, the DOD also issued a news release with the oddly-worded headline: “Press Secretary Smites Fox Host That Dissed Diversity in US Military.”

“‘Smites’ – like we’re a hostile foreign power,” Carlson commented. He added that he and his show would nonetheless “pass” on a confrontation with the military, joking that the DOD may have a “manpower advantage” over his news crew at Fox.