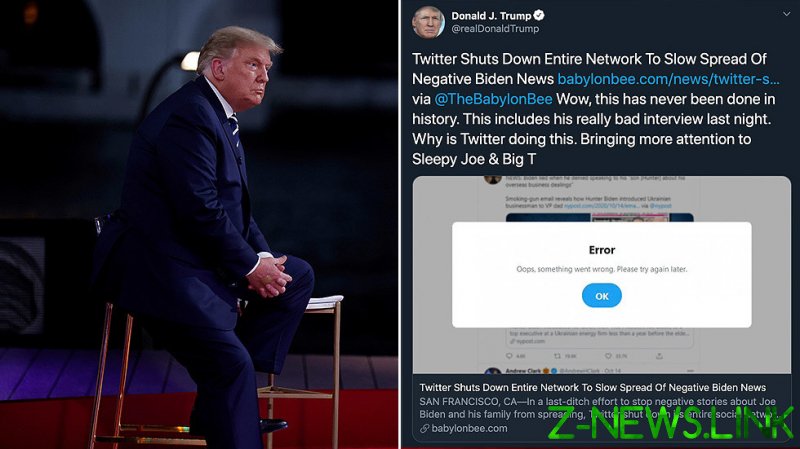 Trump on Friday tweeted the fake story about Twitter shutting down its “entire network” to slow the spread of negative stories about his Democratic opponent Joe Biden.

“Wow, this has never been done in history,” Trump wrote, reacting to the satire site’s post about the supposed Twitter shutdown. “Why is Twitter doing this?” the commander-in-chief asked, adding that it would only bring “more attention to Sleepy Joe [Biden] & Big T[ech]”.

The president was tricked by the story despite the fact that the conservative Babylon Bee describes itself as “fake news you can trust” in its Twitter bio. Trump wasn’t the only one who fell for it, either. Some of his supporters did as well.  “This is not satire!” tweeted one user in Trump’s defense, while a few commenters from the Biden camp didn’t seem to even notice it was fake.

One user pointed out that, besides the fact that the story was clearly satire, the mere fact that Trump was able to tweet about a Twitter shutdown while on Twitter made it quite evident that it wasn’t real.

The majority, however, simply mocked Trump for failing to see the article was fake. Some jokingly referred him to more “reliable news sources” like the Saturday Night Live comedy skits or The Onion, another news-as-satire website.

The president could be forgiven for thinking the Babylon Bee’s post had some truth to it, however. The article referenced the fact that Twitter and Facebook actually did create real obstacles for users trying to access a New York Post article this week alleging that Biden’s son Hunter had corrupt dealings in Ukraine and China.

Both social media giants openly admitted to reducing the article’s visibility on their platforms, prompting outrage and accusations of censorship.

Trump has previously argued that it’s an abuse of US laws for social media companies to filter content on their platforms. Republican senators, meanwhile, are preparing to issue Jack Dorsey, the CEO of Twitter, a subpoena for a Senate appearance and questioning.