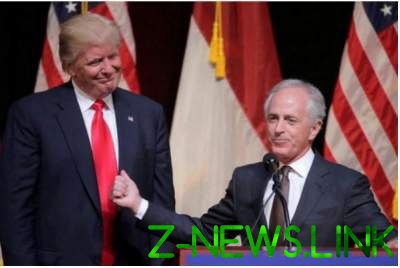 Bob Corker said that the President’s actions could lead to world war III.

The US President Donald trump has exchanged insults with Republican Senator Bob Corker, worsening the already cool relations with another influential party member.

Trump called the head of the foreign relations Committee Bob Corker “voice against” as well as a politician, lacking courage and largely responsible for the “terrible” deal with Iran.

Corker said that White house turned into a “house for the care of adults.” (In the US distributed such a variety of nursing homes, where it is possible to arrange in need of care family member, including for the day or for a few hours while remaining on the job).

Published in the Sunday New York Times interview with Republican Senator Bob Corker said President trump runs America like it’s a reality show, and that his actions could lead to world war three.

Analysts believe that Sunday’s tirade, trump may have been caused by the fact that last week, Corker supported the Secretary’s Rex Tillerson, that also was perceived as an attack against the President.

Media quoted the words of Corker that Tillerson was incredibly upset, because it did not receive adequate support as the Secretary of state.