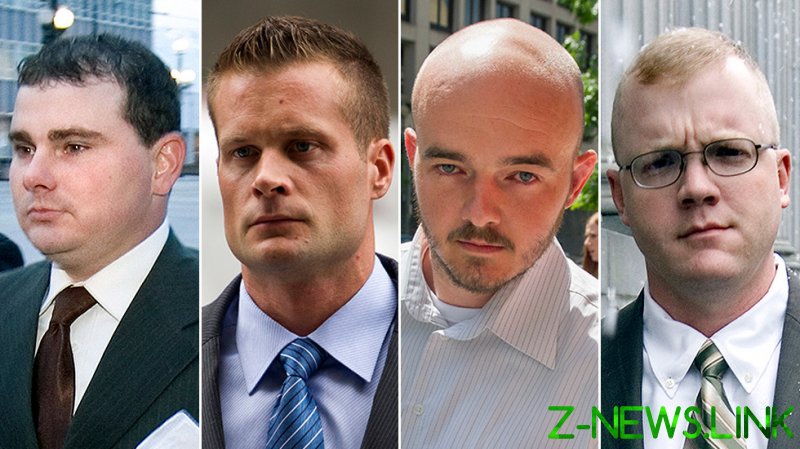 President Donald Trump announced on Tuesday evening that he is issuing 15 full pardons and commuting the punishments of five convicts to time served. Four of the people given clemency were former employees of the infamous private military company Blackwater.

They were serving lengthy prison terms, including a life sentence in one case, for the Nisour Square massacre, one of the most notorious episodes in the US’ military engagement in Iraq.

Seventeen Iraqi civilians, including one child, were killed in the crowded Baghdad square in September 2007, after the US contractors opened fire on people with machine guns, sniper rifles, and grenade launchers. The investigation concluded that at least 14 of them were killed without any reason. The unprovoked attack was carried out by Blackwater guards who were escorting a US Embassy convoy and allegedly thought they had been ambushed.

After a protracted legal process, four people were sentenced to various prison terms. Nicholas Slatten, who was accused of opening fire first and triggering the attack on civilians, received a life sentence.

The news that all four convicts will now walk free, their punishments considered enough, was met with much anger, as public figures and ordinary commenters lashed out at Trump’s decision. Glenn Kirschner, a former US Army prosecutor who is now a legal analyst with MSNBC, said the president “killed justice” with his pardons.

Mark Hertling, a retired general who was involved in the 2007-08 troop surge, called the move “the most egregious and disgusting” of Trump’s actions. Politician Richard Ojeda, a retired mayor, said Blackwater contractors in Iraq were a bunch of “cowboys” who “caused trouble for us, active duty troops.”

Representative Ilhan Omar called the pardoned contractors “mercenaries” and “war criminals,” whose release “will leave a dark mark on the history of presidential pardons.”

Many commenters posted reminders of who the victims of the massacre were.

Others pointed out that securing the convictions of the four perpetrators was a difficult challenge for the justice system, and that the efforts were apparently wasted by the pardons.

Some said that while Trump’s pardon was appalling, people should keep in mind that he was not the one who launched the 2003 Iraq invasion in the first place. George W. Bush and other architects of the war are now a respectable part of the bipartisan establishment in the US.

Supporters of the former contractors had been arguing that the men had been excessively punished and that their prosecution was tainted. “Paul Slough and his colleagues didn’t deserve to spend one minute in prison,” Brian Heberlig, a lawyer for one of the four pardoned defendants, said of the news. “I am overwhelmed with emotion at this fantastic news.”

In 2007, Blackwater was headed by Eric Prince, the brother of Trump’s secretary of education, Betsy DeVos. He resigned and divested from the firm after the scandal over the massacre erupted. The company itself went through a series of re-brandings. Last year, Prince lobbied the Trump administration to replace US troops in Afghanistan with thousands of mercenaries.