Home / economy / Trillions to the isolation 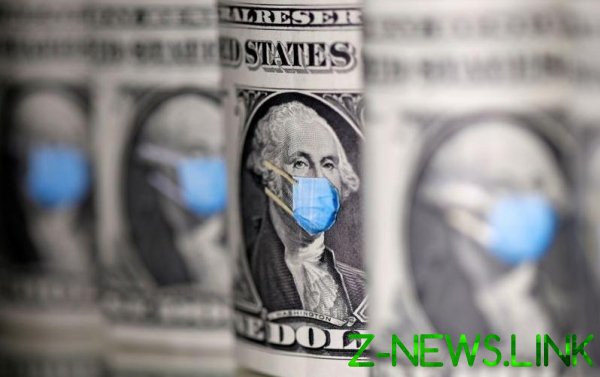 In the fight against coronavirus joined the Federal reserve

The American government proceed from the subjective perceptions of the scale of the impending upheaval. If we evaluate their current efforts, especially in comparison with the packages of unprecedented measures adopted in the crisis of 2007-2009, it can be concluded: in the United States believe that the national economy will suffer the most serious shock since the Second world war. The ruling elite probably believes that the crisis can take years. This is due to the fact that now in the “single focal point” gradually converge several cyclical and structural crises pandemic and coronavirus, which rocked the entire “vaunted” American system of health care, economic, political (loss of control of the course of social processes), the collapse of the liberal model of globalization, ecological, manifesting itself in abnormal climate change. Therefore, are taking unprecedented measures to make available to the ruling elite of the financial safety cushion of unprecedented size.

The Federal reserve, who is in complete control of the administration of the President of the United States have taken serious steps to save the situation. Note that the fed’s actions do not require the consent of Congress. 16 March, she zeroed interest rates, and this means that today in the United States minimized all current and future interest payments and on debt. And it seriously eases the situation of the real sector of the American economy. In the banking system injected real money to ensure that banks, especially large ones, have not experienced problems with liquidity. In the economy will be thrown in 1.5 trillion dollars in cash. And it is also an unprecedented step.

Today in the “safety cushion” of the fed’s four-trillion dollars, they are available to American banks, and with the additive it will increase to 5.5 trillion, which is approximately 25 percent of GDP. Such an insurance margin of safety for the banking system of the United States ever created.

In addition, we introduce the so-called program of quantitative easing in the amount of $ 700 billion. The funding of the purchase of distressed assets or debts as the banks and major corporations. In this connection, you can specify that the corporate debt sector of the American economy at the end of 2019 was 10.1 trillion, financial — 16.7 trillion dollars. I note that the issue of bankruptcy in the States is aggravated by the fact that the toxic assets in the form of receipts of depreciated capital or debt, it is difficult to claim. These “junk” securities will be redeemed, the fed for cash. Over time from debtors, as it will improve their condition, will collect the money. This process will take years, but such a maneuver funds will help the American economy for some time to stay afloat.

In early March, the United States adopted a program against the epidemic of the coronavirus with a budget of 8.3 billion dollars. Of these, approximately 7.5 billion the government will spend to pay for the development of vaccines and drugs to fight the infection. The rest will be allowed to pay for the production of masks, procurement of specialized medical equipment. Plus, 18 Mar Donald trump involved was signed in 1950, Harry S. Truman, the Law on military production. The Federal government in the decision-making procedure will require U.S. manufacturers to increase production of drugs, respiratory masks, gloves and other equipment to combat the epidemic of the coronavirus. By the way, by the end of March, the U.S. came in first place in the world in the number of cases, the number of which exceeded 100 thousand people, and until the situation change for the better is not visible.

This act extends the intervention of Federal authorities in the economy. In particular, March 27, the White house established a “check digit” production of ventilators to clean the lungs in the amount of 100 thousand units (now in American hospitals used all six thousand of the ventilator) and in the decision-making procedure ordered of the Corporation “General motors” to immediately begin their production. In the future, the provisions of the act can be used to expand production of military equipment needed, for example, to prevent the spread of the coronavirus pandemic outside the United States. In the calculation of the 2020 fiscal year, the amount of funds available to the administration trump for the implementation of the provisions of the law, is about $ 65 million.

With regard to measures of direct support of the population, it will provide cash dollars. In many ways, the program is political in nature – by many Americans, no doubt, will perceive the “giveaway money” as a campaign gift from trump. Each working citizen of the United States with annual revenues of less than $ 75 thousand Federal government disposable will be paid in cash of $ 1,200 and for a family of two – about $ 2,400. In addition, another $ 500 relies on each child. Americans with income above 75 thousand is also entitled to a lump sum payment, but in the truncated size.

Provides an additional monthly increase of $ 600 for unemployment benefits, up to the end of July. After that, the state governments and municipalities can count on further allocation of funds until the end of the year, depending on market labor. In sum, this is an emergency programme of assistance to the unemployed, called a pandemic, for the period of 39 weeks. It clearly indicates the return to US “Ghost” of chronic unemployment. The number of unemployed Americans to exceed 10 percent of the working population of the United States. In mid-March, the US Treasury Secretary Steven Mnuchin even frightened to 20 percent if U.S. lawmakers do not take emergency measures to save the economy. In 2009, the maximum number of unemployed reached about 10 percent, so the power comes from the fact that today they can be even more. The entire program is the payment of unemployment benefits is estimated at $ 250 billion with validity period until 31 December 2020. In a pandemic coronavirus it means that the US is preparing for the worst variant, when the army of the unemployed may turn into a rebellious army. To do this, the governors of 22 States have already issued orders for the mobilization of the national guard – in case of fire.

To keep afloat small businesses (employing 500 people or less) that do not have significant financial reserves, will be allocated 377 billion dollars that will be spent on wages and salaries within two months even if they cease to manufacture products and provide services. Amount includes loans and credits, which will have to return, but after the normalization of the situation in the economy.

For corporations creates a Fund of $ 350 billion. The mechanism of use of these funds provides for the allocation of reimbursable loans, credits and guarantees thereon, which must be repaid after returning the economy to normal conditions. The money will go to support companies regardless of the profile of activities whose economic difficulties and operations, mainly production, directly linked to the challenges of the pandemic. But in order to access these tools, businesses will have to prove that they were influenced by the epidemic of the coronavirus. To control the distribution of money will be the Ministry of the Treasury, to distribute them – mostly state and local authorities, who also received $ 150 billion in support of regional education systems, public transportation, aid to children and the poor, the organization of elections, the development of infrastructure. This Fund – it quite seriously and experience shows us that the fiddle will play the Ministry of Finance, and the bulk of the funds will receive a large company.

Dedicated 50 billion of direct financial assistance will go to support the airline and transport companies and partly of companies whose activity is the national security of the United States.

$ 140 billion will directly receive from hospitals and other medical facilities. The money will go to expanding the number of beds, equipment and medicines. $ 16 billion is allocated for the creation of a strategic reserve of drugs and medical devices that can be used to fight future pandemics. About 10 billion will additionally receive the Pentagon for strengthening the border control and combating drug trafficking.

Students are introduced to financial break: until September 30, deposited all payments on student loans, the total amount which to date has reached astronomical sum of 1.5 trillion dollars, and the debtors are 44 million people, of which at least seven million are considered bankrupt on the loans to which they have resorted to higher education.

Deficit US Federal budget for fiscal year 2020 could reach 15 percent of GDP. It is extremely significant that the congressional Budget office, the US has not published relying in this case to calculate the influence of this stimulus package on macroeconomic parameters. This calculation, of course, was made, but it, apparently, classified. The ruling elite and did not want to think about the possible costs of rescue of the American economy, as is implicitly understood: in this case we are talking about preserving the American political system as a whole, democracy, existing for over 200 years.

It is significant that in the Senate for the stimulus package voted unanimously: 96 in favour, one against – an unprecedented unanimity in the last 15-20 years. In the house of representatives relies in this case, a roll-call vote was not at all that resembled a village gathering “For? Against? No abstentions. Adopted unanimously”. Donald trump immediately signed the bill into law the evening of March 27 in the “inner circle” of trusted entities trusted from the point of view of a negative test for the coronavirus. Democrats – all types of “contagion” in American society is not called at all.

I believe that the US is approaching the red line increases the risk of their recognition by the state bankrupt. This suggests that the American ruling elite is ready today to “miss” the economy is the sole hegemon, and with it the entire global economic system through “dive” into the depths of the crisis. And time will tell who will come up, and who is doomed. This is strongly reminiscent of the Great depression, when, essentially, the same thing happened – the economy, along with the state machinery of many countries crashed in the waves of the stock market crash of 1929, world war II only added to its effect.

The question arises: to what extent is the victory in economic competition will be linked to the use of military force? It’s simple – the United States is able to say that to pay the debts no longer. And the situation could repeat 30 years, when the refusal of Germany from the reparations brought to power the Nazis unleashed the Second world war.

There is another important point: unlike the crisis of 2008-2009, which formed the community of the G20 and the idea that in the conditions of globalization all the leading countries should unite in the fight against economic shocks, today dominated by the principle of “Every man for himself”. And the policy of “own shirt closer to the body”, exacerbated the mass psychosis of mers may result in the fact that the economic crisis will last a decade.

Today, the United States only rely on their own strength. Perhaps in the White house believe that in the chaos of money from all over the world will flow back into the stock markets and banks in the United States. The calculation is done on what is working at full capacity, the fed’s printing press will not create serious inflation, especially hyperinflation pressure, and the stock markets, as in the 2017-2019 years, will regain the ability to be the main engine of development of the American economy. For the current President and his entourage the main thing – in an election year to keep the economy (and the country as a whole) afloat. Money is Donald trump will not regret it.

Vladimir Vasilyev,
doctor of economic Sciences, chief researcher of the Institute of USA and Canada