Home / WORLD / To USA gets a new powerful hurricane “Nate”

To USA gets a new powerful hurricane “Nate” 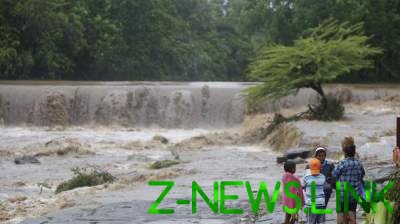 Now the elements is raging near Nicaragua

A tropical storm named “Nate”, which originated in the Caribbean and gaining the force of a hurricane, has caused the deaths of four people in Latin America and goes to the U.S. Gulf coast.

“It is expected that “Nate” will reach the southern Gulf coast this weekend, with the force of a hurricane, and the threat of destruction from the powerful winds and strong precipitation increases,” – said in a statement.

Now the elements raging in close proximity to Nicaragua.

According to preliminary information, the local authorities confirmed the deaths of two people from the disaster, three more reported missing. In addition, Costa Rica also reported the death of two people. The flood caused by bad weather, flooded about 5 thousand houses.

Recall that in the last month, the U.S. and its island territories were hit by several tropical storms 4 and 5 category. Damage to the budget of the United States hundreds of billions of dollars. Puerto Rico is experiencing severe financial difficulties. In particular, the research Agency Moody’s Analytics estimates caused by the hurricane damage to the island nation approximately 95 billion dollars.

Previously, trump has promised that his government will continue assisting the affected by hurricanes “Irma” and “Maria” in Puerto Rico as long as people will not be safe. He said that the United States sent to Puerto Rico 10 thousand Federal employees, including five thousand soldiers.

In the USA hurricane “Nate” expected Sunday, then predicted he will pass through the land of America, in the Northern part of the country.