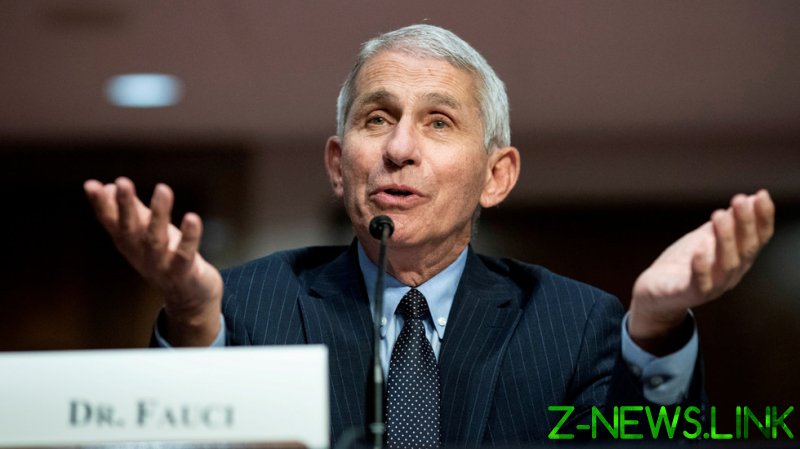 Since the first reports of the novel coronavirus on American shores, Fauci has been front and center, scaring the life out of Americans with apocalyptic predictions of millions of deaths that – while they haven’t come to pass – have triggered devastating economic shutdowns. A recent survey found nearly two out of five US families planned to spend the next year in “survival mode,” having no choice but to put aside long-term goals in order to do whatever they can to make ends meet as the economy circles the drain.

It’s no coincidence that Fauci’s directives to “hunker down” for the much-hyped “dark winter” came ahead of the Christmas shopping season, when most retail businesses earn their way back into the black in order to make it through the following year. Fauci and his colleagues in the US health bureaucracy are facilitating the asset-stripping of America, whether or not they’re aware of it.

The Covid-19 czar’s opposition to the cheap, off-patent malaria drug hydroxychloroquine (HCQ) has cost hundreds of thousands of lives, according to some expert estimates. While the World Health Organization (WHO) terminated its trial of HCQ stating it showed no improvement over standard treatments, there is evidence of success from countries that used the drug to treat early symptoms of Covid-19 – and the US, where the drug was demonized and politicized, is among the top ten in terms of coronavirus-related deaths per capita. Fauci has pooh-poohed the cheap drug in favor of Remdesivir, itself a failed (but fantastically expensive) ebola drug – which the WHO has likewise admitted has little therapeutic potential against the coronavirus.

Indeed, Fauci has gotten every single “epidemic” in his 50-year tenure wrong. From suppressing drugs that were effective in treating AIDS-related pneumonia, resulting in some 17,000 deaths, to shilling for the swine flu vaccine that spawned a narcolepsy epidemic among vaccinated children in 2009, he has been persistently on the wrong side of history. He has lied under oath regarding documented side effects of the measles vaccine and foisted highly toxic AIDS drugs on healthy people under the guise of “pre-exposure prophylaxis” (PrEP). The career medical official has gallons of American blood on his hands.

Ironically, these characteristics would make him ideally suited to Time’s ‘person of the year’ designation – which has been awarded to the likes of Adolf Hitler, Henry Kissinger, George W. Bush and Barack Obama. The man has always put profits before people, a characteristic which should preclude holding public office but which is praised in the sociopathic ruling class circles that anoint America’s ‘leaders.’

Many dystopian works of literature and film use the term “guardian” to denote secret police, and the term fits Fauci perfectly. The immunologist even undermined his own fearmongering when he all but admitted the “gold standard” PCR test used to diagnose Covid-19 is essentially useless – yet gleefully uses these bogus test results to terrorize the American population.

Time is far from alone in lionizing Fauci – indeed, the entire media establishment hangs on his every word. The editor of Yale University’s book of notable quotes declared Fauci’s “wear a mask” to be quote of the year – even though the official had, just a few months before imploring Americans to mask up, declared such a precaution unnecessary, and even detrimental.

Given the utter disaster 2020 has been for the US and many other countries, perhaps it’s fitting that Fauci should be selected to epitomize it. But with the rollout of barely-tested vaccines looming in the future, and the possibility that a “don’t call it a mandate” vaccination certificate will be a requirement to participate in what passes for normal life post-Covid-19, Americans should seriously reconsider placing their trust in this avatar of medical totalitarianism.