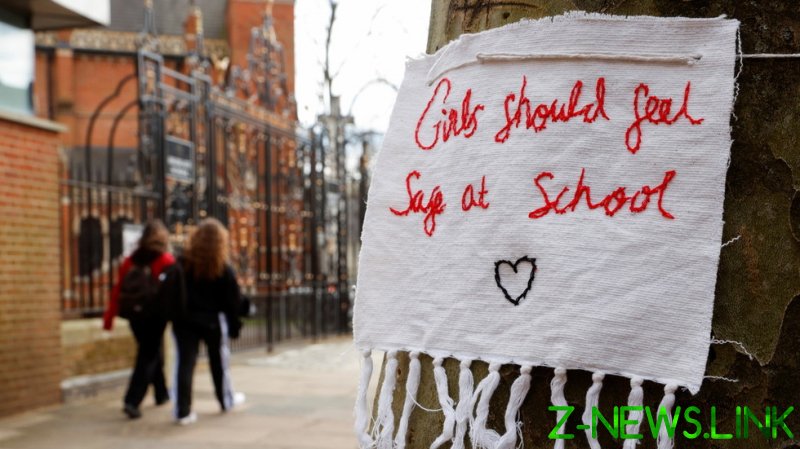 Officers have been reviewing anonymous testimonies posted on the website, which collected evidence about “misogyny, harassment, abuse and assault” in UK schools, to “establish” whether any of the victims could be “encouraged” to actually report the crime to law enforcement, the Met Police said in a statement on Friday.

The Met added that it had already received some reports on “specific offenses” currently under investigation. Officers also contacted certain schools named in some of the anonymous testimonies to offer support to potential victims. On Friday, the department held some “detailed” meetings on the issue.

The Met’s lead officer for cases of rape and sexual offence, Detective Superintendent Mel Laremore, called the number of reports published on the website “deeply concerning.” The superintendent also repeatedly stated that the police were ready to offer support to any victim-survivor who may need it, and were working to ensure that anyone willing to report such an offense could do so.

The police response came a year after the site Everyone’s Invited was created by 22-year-old Soma Sara for students to anonymously report cases of sexual abuse and harassment. Since that time, more than 5,800 accounts have posted there, with the initiative making headlines in some UK media as well as sparking a public debate about what was called a “MeToo” moment for UK schools.

The site’s founder told the BBC earlier that the collected testimonies expose “rape culture and the scale of violence against young people in the UK.” The police said they have been “aware” of the website since March 12.

Some of the allegations concerned private schools, including a number of the UK’s most elite education facilities. Laremore blamed this on the fact that private schools often do not have a formal cooperation network with police, but added that the issue is certainly not limited to just those establishments. The superintendent also said that some 100 educational institutions were explicitly mentioned on the website, which has since stopped publishing school names.

Earlier this week, students at Highgate School – a 456-year-old educational institution considered one of the best private schools in the UK – staged a walk-out in protest against what they called “toxic rape culture.” The protest at the school, which charges fees of £21,600 ($30,000) a year, came after a dossier covering more than 200 testimonies was presented to the school’s governors.

The school administration then appointed a former Court of Appeal judge, Anne Rafferty, to review the cases.