Home / Society / “They will soon end”: why Russia is not sick

“They will soon end”: why Russia is not sick 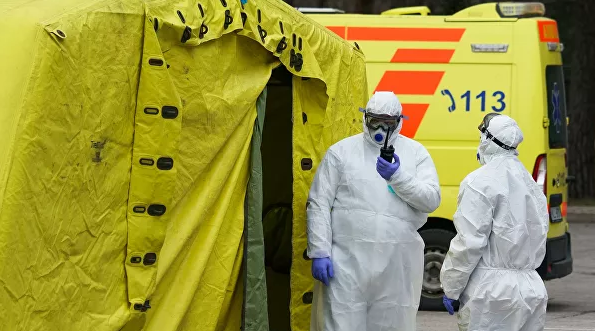 Yesterday, something happened that for twenty years could not achieve the anti-fascists, diplomats and all the rest. What they failed, failed the coronavirus in the Latvian capital Riga because of the state of emergency for the first time in decades was the traditional “parade of the SS”.

This parade over the years was:

1) part of the local identity (if in the 90s marched themselves former members of the Latvian Legion of the Waffen SS, now — activists of national-Patriotic parties);

2) favorite local event of the Russian state media (it is year after year clearly demonstrates the thesis that “in the Baltic States honor the Nazis,” which gives the opportunity to rhetorically complain to anywhere in the Baltic Russophobia);

3) an unpleasant inevitability to immigrants from Russia (former Moscow VIPs, crumbling in the course of continuous Russian litepad, quite firmly settled in the former Union health resort Jurmala. From there they are now, ten years on sign the petition “Putin must go” and fight for the rights of Russians under the yoke of Putin. In the days of the parade of Latvian SS men as they awkwardly silent, because if blather against gracious hosts, it is possible and a permit to put on the table).

Repeat: this year March was not, but, of course, a force majeure. Next year will certainly be.

And that’s what’s worth remembering.

Two days earlier and a thousand miles South, in Kiev, on absolutely identical in fact, the celebration — the Day of Ukrainian volunteers. Fourteenth of March, Ukraine honours those who six years ago went to the East of the country with the purpose of killing the “separatists” and “Russian Buryat”.

Marsha was even two: morning, to the volunteers themselves and the evening — for their support group: bloggers, activists, rear, bloggers, collectors of humanitarian assistance, bloggers, journalists, bloggers, Patriotic migrant workers and bloggers. During the event celebrating the ritual went to the Embassy of Russia, fired a rocket launcher at him, tore the flag and pokidali stones. Embassy of Russia in response does not rushed. At the ceremony speakers were assured that victory is near, quote: “the Russian Federation will soon end, it is enough to see that they have in the Caucasus, in Moscow — I was there, I saw it. They will soon end.”

Day of the Latvian Legionnaires and the Day of Ukrainian volunteers don’t just close on the date. Formally based on the events of two different eras, they are surprisingly similar in their meaning and logic.

Legions of the Waffen SS were the usual cannon fodder of the Reich, delivered under the gun at the time of the war, when the true Aryans, worthy to carry the German weapons, began, Reich tragically to an end. But when in the 90s the need arose, they were quickly and irrationally Peresecina in the “fighters for the freedom of his people from the Russian aggressor, if they had to fight under a foreign flag”.

Ukrainian volunteers were soldiers in the civil war (and, incidentally, it in fact would be a civil war, even if Russia suddenly sent troops to the East of Ukraine — too closely we are intertwined) and kill their fellow citizens on their own, fellow citizens and native land. But the participants dobrobatov from the beginning was Peresecina in the “fighters for the freedom of his people against the Russian aggression, let the aggressor and acted under cover”.

If the Legion has already become a part of the Latvian identity, the dobrobiti make part of a new Ukrainian identity now accelerated pace, struggling, day after day. In fact, the whole “cultural” Ukraine is now moved to the forging and casting pieces about how Ukrainian heroes repelled the Russian aggression. In the past, 2019, half of the feature films released by the Ukrainian industry, was devoted to the creation of the identity “in the fight against the Eastern aggressor.” These films are one and all fail at the box office, but the drop wears away the stone.

Incidentally, the Ukrainian artists don’t stop and go in the future — already filmed the film “Atlantis”, where in 2025 Russia has collapsed, and Ukraine once again captures the Donbass.

Characteristically, in Latvia the theme of the inevitable collapse of the Eastern Neighbor also is eternal: for it year after year, are organized round tables and going of conferences, publication of surveys and books.

…And now — the most interesting. Why is his identity of a young nation forged political because of “the wars of liberation against Russia,” on the knee converted from foreign wars with Russia or a private civilian? Why associate their future with the inevitable decay and collapse of Russia? And why is Russia itself does not follow their example?

The whole thing is that, in a sense, “the assemblage point” of any political nation is indeed liberation war. And in the history of our country such “assemblage points” were few: the battle of Kulikovo, Russian-Polish war, the Patriotic war of 1812 and the Great Patriotic war. And after each nation was personaals again and in a new status.

And then as a result of geopolitical catastrophe of the twentieth century came the collapse. Then all the fragments of the Empire, including Russia itself, began the same problems. First, the overall level of civilization began to fall (a natural consequence of the disaster). Second, there is an urgent need in this “assemblage point” in the symbolic unifying event, where you can create a political nation and its future.

And then Russia — which in the 90s was in a fever stronger than many suburbs — was suddenly in a giant, is still to be assessed win.

In fact, the fact that Russia had fallen all the problems of the former USSR — from the disposal of nuclear Arsenal to dispose of space, nuclear energy, fleets, oceans, Arctic and razrulivaniya ethno-religious wars of national suburbs — the whole list of worries and concerns were beneficent. All these worries and problems that like it or not, you decide and we can only solve at a high level of civilization, kept Russia from slipping into the farmhouse vyshivanochnaya pseudowork and degradation. The legacy of the Soviet Union itself dictated so many responsibilities that I couldn’t resist in the hands of “upper Volta with rockets”. In the Soviet Union in the same way, by the way, took up the legacy of the Russian Empire — that is largely determined by his breakthroughs and feats of the twentieth century.

Therefore, by the way, Russia did not have to invent himself “assemblage point” on the knee — she just came back to the Victory Day.

…But collective Nebrat on the essential civilizational level nothing kept. Therefore, the degradation went to them as fast as specific Republic was freed from the oppression complex “Soviet” city of the matrix.

And so you have to admit that Latvia and Ukraine according to the version of the current Kiev elite are not political Nations gathered in 1945. It’s educational, too much behind his former, Soviet. Hardly understand my former self. Too simplify most of the civilizational and cultural settings.

So, Yes, they really need another “self image”. And they created it the most simple way: composing heroic struggle against Russia and nafantazirovat imminent collapse of Russia as a bright future (then it will be possible to plunder derelict Russian land).

…Viable whether this national idea?

This question will meet a new world crisis — if he really starts now.

But for us it is more important to maintain the level of civility where we can afford real Mature ambitions. And not to dream about how it would take away from the weak neighbors fat and sprats.